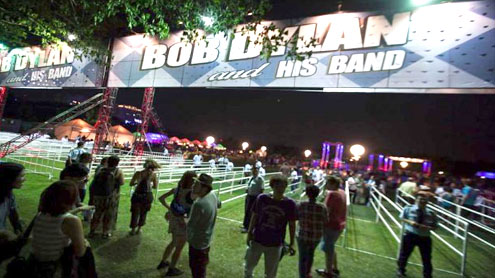 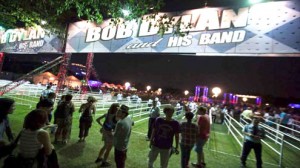 Vietnam: After nearly five decades of singing about a war that continues to haunt a generation of Americans, legendary performer Bob Dylan finally got his chance to see Vietnam at peace.The American folk singer and songwriter known for his anti-war anthems gave a special concert Sunday in the former Saigon, nearly 36 years after the Vietnam War ended.Dylan, 69, jammed on stage in a black jacket, purple shirt and white hat in the warm evening air, singing favorites such as “A Hard Rain’s a-Gonna Fall” and “Highway 61 Revisited.”Only about half of the 8,000 seats at RMIT University were sold to a mix of Vietnamese and foreigners who danced on the grass as Dylan played guitar, harmonica and the keyboard. With more than 60 percent of the country’s 86 million people born after the war, many young people here are more familiar with contemporary pop stars like Justin Bieber.Still, Dylan’s music during the tumultuous 1960s touched thousands of people in both nations.”Bob Dylan’s music opened up a path where music was used as a weapon to oppose the war in Vietnam” and fight injustice and racism, said Tran Long An, 67, vice president of the Vietnam Composers’ Association. “That was the big thing that he has done for music.”

An was a student in Saigon, now called Ho Chi Minh City, during the war and took to the streets with other Communist sympathizers calling for the killing to stop. He remains a big Dylan fan and has a large collection of the singer’s records.For some who were fighting in Vietnam’s jungles, Dylan’s music was a source of hope.”We listened to anything that spoke of peace. We called him the peace poet,” said Stan Karber, 60, of Fort Smith, Arkansas, who served in Vietnam from 1969 to 1971 and has lived in Ho Chi Minh City for the past 15 years. “I’ll be dancing here in a minute.”The fighting ended on April 30, 1975, when northern Communist forces seized the U.S.-backed capital of South Vietnam, reunifying the country. About 58,000 Americans were killed along with some 3 million Vietnamese.Sunday’s concert followed the 10th anniversary of the death of anti-war Vietnamese folk singer Trinh Cong Son, known as the “Bob Dylan of Vietnam.” The opening Vietnamese acts played a tribute to Son, who remains highly popular.Dylan is one of the top foreign artists to perform in Vietnam, where big-name concerts are still rare and the Communist government maintains strict controls over expression. Dylan’s song list had to be preapproved by the government, but promoter Rod Quinton, general manager of Ho Chi Minh City-based Saigon Sound System, said no restrictions were placed on the extensive set list submitted.

Dylan received criticism earlier this week following his first-ever shows in China for allowing the Communist government there to vet his song list. Two popular anti-war songs, “The Times They Are a’Changin'” and “Blowin’ in the Wind,” were not performed at the Beijing and Shanghai shows, but it was unclear if they were submitted for consideration.U.S.-based Human Rights Watch issued a statement saying, “Dylan should be ashamed of himself.””The young Dylan wouldn’t have let a government tell him what to sing,” Brad Adams, executive director of the organization’s Asia division, said in the statement. “He has a historic chance to communicate a message of freedom and hope, but instead he is allowing censors to choose his playlist.”Dylan’s U.S. publicist referred questions to the promoters in Vietnam, who declined to comment.Vietnam, while prospering as one of the fastest-growing economies in Asia, does not tolerate any challenge to its one-party rule. Rare protests are quickly quashed by security forces, and a spate of prominent pro-democracy activists have recently been arrested or given lengthy jail terms after calling for democracy.

The government also routinely blocks access to websites considered a threat, including Facebook.But the country, once defined by grainy images of U.S. planes dropping bombs over pockmarked jungles, has moved far beyond what Vietnamese here call the American War. Since the mid-1980s, Vietnam has embraced capitalism, and today’s Ho Chi Minh City is electric with a sea of motorbikes buzzing past shops selling everything from knockoff North Face backpacks to real Chanel bags.A single glass skyscraper defines the city skyline, but the flurry of construction in all directions assures visitors that more change is coming.”The chances of watching Bob Dylan live are not many, and he’s no longer young,” said Hoang Dao Cam, 42, who flew from the capital, Hanoi, for the show with five other hard-core fans. He said his father taught him English at age 6 by singing “Blowin’ in the Wind” to him. “I just cannot miss this opportunity.” – Yahoonews