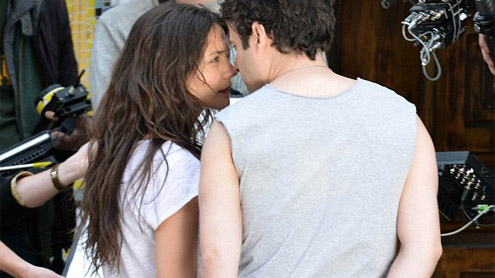 She hasn’t been linked to a serious boyfriend since divorcing Tom Cruise.And Katie Holmes certainly seems to be enjoying single life, even if it is all part of the job.

The 34-year-old actress was seen getting close to her co-star on the New York set of her latest movie Manic Days on Tuesday and didn’t mind cosying up to the hunk.At one point the thespian was spotted staring intently into his eyes as they filmed a close-up shot.Despite pressing their noses against each other, the pair kept their hands to themselves for the intense shot.

Katie’s palms were firmly to her side while Canada’s Luke Kirby placed his on his bottom. Afterwards, Katie could be seen laughing as she walked around the set with him, also grinning and making goofy facial expressions as she stood alone later.The onscreen couple dressed similarly in denim trousers and plain tops to record scenes, both brunettes sporting slightly curly tresses.From the smile on her face, it’s clear Katie is enjoying her work.Gripping her hunky co-stars hands in her own earlier, the Katie flashed him a heartfelt grin.

And while the two were in character at the time, it’s likely that working with such a handsome co-star is a perk of the job for Katie.Katie has been filming the movie since the beginning of the month alongside Canadian actor Luke Kirby, who is relatively unknown outside of independent film circles.The 34-year-old held on tight to Kirby as they filmed on the steps of a church.They stood hand-in-hand as they lit a candle on the steps, before heading off together.

Between takes Katie seemed in a great mood, laughing and joking with her co-star, and pulling funny faces when she noticed the cameras watching.In Mania Days – produced by Spike Lee and set to release in 2014 – Katie stars as a manic depressive poet who falls pregnant to a manic depressive rapper. Mania Days is Katie’s second film since her split from husband Tom Cruise.After an almost complete career hiatus during the marriage, Katie is certainly back having briefly done a Broadway show and also she currently has three films in production.Filming on location in New York must give Katie pause for thought.In a break from filming the actress wandered down to her old neighbourhood to grab a coffee.

The movie is filming just two blocks from the luxury apartment where the family lived.Its likely that being so close brought back memories for Katie, who split from Cruise in June last year.Dressed in character in cut off jeans, and a warm down jacket to keep off the chill, Katie’s hair was left long and loose as she walked around the city.With daughter Suri in school, Katie appears to be enjoying the chance to indulge her artistic side and has been spotted larking around with her fellow stars onset, including a young child star. – DailyMail