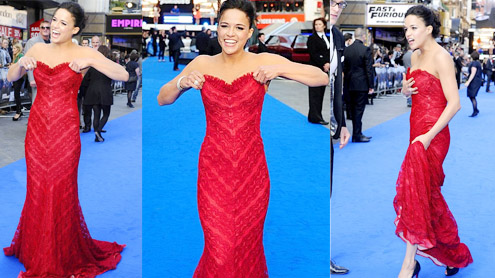 She’s set to send motors racing once more in the latest movie in the Fast & Furious franchise.So it seems apt that Michelle Rodriguez also ramped it up a gear at Tuesday night’s Fast & Furious 6 premiere in London.

The 34-year-old actress lead the glamour at the screening as she walked along the special blue carpet surrounded by her co-stars.Michelle stood out in the vibrant number as she sauntered along in front of the fans and photographers in the floorlength strapless red gown.And although she looked stunning in the ensemble she seemed to struggle to contain her modesty thanks to her ample cleavage.

As Rodriguez walked along she was seen pulling up the front and holding on to the chest area as she made her way along the carpet.But she didn’t let the near wardrobe malfunction affect her as she gleamed at the vent, grinning from ear-to -ear.She completed her look with her dark locks piled into an up ‘do, while she kept her make-up minimalist and accessorised with Louboutin peep-toe heels.Michelle seemed in high spirits as she expertly posed for the cameras.But she wasn’t the only star to up the glamour factor at the bash.

Her co-stars Elsa Pataky and Jordanna Brewster were also on hand to wow the crowds in their get-ups.Jordanna, who plays Mia Toretto in the latest film, stunned in a Jenny Packham fully embellished, floor length strapless dress in sugar pink.She also went for a strapless floorlength cut which she looked confident in as she had her turn in front of the crowd.Jordanna completed her look with her locks worn down and wavy to just above her shoulders.

Pataky, meanwhile, also went for an embellished number in a light colour as she channelled her inner flapper girl thanks to the 1920s style.Gal Gadot made her mark in a plunging black wet look gown, while Gina Carano also dressed to impress in a strapless metallic ensemble.Other guests and stars gracing the carpet included the men of the film Paul Walker, Tyrese Gibson and Vin Diesel.Earlier on Tuesday Michelle Rodriguez arrived at ITV studios to appear on Daybreak with her co-star Luke Evans wearing white jeans and a matching tuxedo shirt.With a smile on her face, Michelle, 34, looked as good as her first appearance in The Fast And The Furious back in 2001.

Speaking to Lorraine Kelly and Aled Jones, Michelle chatted about her time filming the sixth movie in London.’That was great during the Olympics – it was so nuts.’ she told the presenters. ‘ I didn’t get to go [to the events] but I loved the traffic, the crowds of people, and the ambiance was so great.’Michelle is in the capital to promote Fast And Furious 6, which features nearly every cast member from the last five movies.But like the Rocky franchise, the cogs are already in motion for a seventh film, and the Latino star is getting ready for that production. ‘I’m going to be busy working on the next Fast – it’s a machine!

‘They [the production team] are going to top themselves though – but hey I came back to life.’Indeed, for in the fourth film – Fast & Furious – her character Letty was presumed dead by the end credits, but the scriptwriters have played with the story to bring her back.However, it’s not just a loving reunion for Letty and Dominic Toretto (played by Vin Diesel), for the action is brought to the UK thanks to an English bad guy called Owen Shaw.’There’s something about the English accent that creates a mystery behind the villain,’ Michelle told Lorraine and Aled.

34-year old Evans is that villain, but playing a menacing criminal mastermind is a far cry from his performance origins in the West End.The Welsh actor starred in the stage productions of La Cava, Taboo, Rent, Miss Saigon and Avenue Q.But just because he’s playing an action man – he also starred in Clash Of The Titans and The Three Musketeers – he hasn’t stopped singing: ‘You can’t shut me up once I get going and if there’s a karaoke machine in the building, well.’Also in the capital were Michelle and Luke’s co-stars Paul Walker and Bow Wow.The two American actors enjoyed a night out at London’s Rose Club on Monday night. – DailyTimes