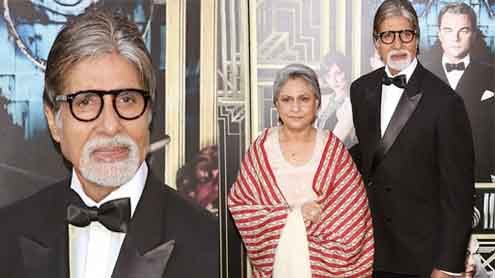 He’s one of India’s most respected veteran actors, with a career spanning four decades. And Amitabh Bachchan cut a dapper figure as he hit the red carpet at The Great Gatsby premiere in New York on Wednesday, celebrating his first Hollywood role in Baz Luhrmann’s eagerly-anticipated film.

The 70-year-old star was accompanied by wife Jaya Bhaduri, 65, as the couple gear up to celebrate their 40th wedding anniversary next month.The Indian acting royalty joined the host of other stars at the opening gala for the new adaptation of F Scott Fitzgerald’s classic 1920s novel.Instantly recognisable in his black tie and thick-rimmed black glasses, the star stayed close to his actress wife, who is also an MP in India.The husband and wife, who married back in 1973 and have two children together, will be marking their milestone in June.Amitabh, who has appeared in over 180 films during his career, plays Meyer Wolfsheim in the film, acting alongside Leonardo DiCaprio and Tobey Maguire.

The character in the book is shrouded in mystery and little is known about him apart from the fact that he is a business associate of Gatbsy’s, who is thought to be involved in New York’s underworld.He might be a Bollywood icon, but his part in The Great Gatsby marks Amitabh’s first Hollywood film, despite it being a cameo.The actor recently revealed that director Luhrmann had visited him in Mumbai two years ago to offer him the role in person.’I play Meyer Wolfsheim for about a few seconds… by the time you look down on your popcorn to pick another morsel, I’d be gone from the film,’ he posted on his Twitter account after he was announced.

Having clearly received praise for his role in the much-talked about new film, he posted a message of thanks following the premiere.’Much being written and said in glowing terms of the reactions at “Gatsby” premiere towards a certain 70 yr old … a humbling moment,’ he wrote. Amitabh, who rose to prominence in the 1970s, is also known in his native country for hosting Who Wants To Be A Millionaire?, which he fits in around his acting schedule.After his taste of Hollywood, it seems that the actor is returning to what he knows best, with a number of Indian film projects in the pipeline. – DailyMail