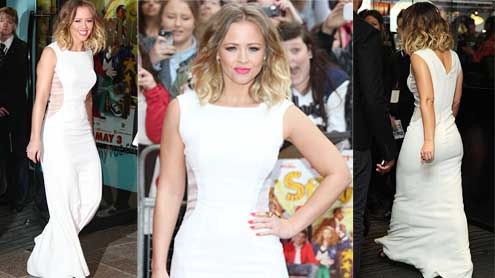 The Bradford-born singer showed off her curves in the hourglass enhancing dress, whose sheer side paneling hugged her waist to perfection.With her ombre hair tousled around her face, Kimberley, 30, finished off her red carpet look with coral lipstick and nail polish on Monday night.Accompanied by her brother Adam, Kimberley joined her fellow cast members at the UK premiere for the family film.It tells the story of two kids trying to save their struggling youth centre from closure, by putting on an ambitious dance show.

It stars Horrid Henry’s Theo Stevenson and Got To Dance winner Akai Osei-Mansfield as the young friends, with a bevy of British acting favourites to make up the supporting cast. Ashley Jensen, Hugh Dennis, Ashley Walters and Kevin Bishop star, as well as honorary Brit John Barrowman.At the time she was offered a role in the children’s film, Kimberley said she was ‘thrilled’: ‘I have worked with Theo before on Horrid Henry and he is a huge talent. I loved the script as soon as I read it.

‘It is a heart-warming family film that will put a huge smile on your face.’Ashley, 43, arrived in tribal fashion, wearing a sequined Navaho print jacket with black trousers and carrying an alligator-skin clutch bag.Akai, 14, also went for animal print when selecting his red carpet outfit, wearing a blue and grey leopard print blazer.

Outnumbered star Tyger Drew-Honey arrived to support his onscreen dad Hugh Dennis’ new movie, wearing head to toe denim.Ashleigh Butler, 17, brought her favourite accessory along: her talented dog Pudsey.Not one to miss an opportunity to perform some tricks, the canine jumped up on his hind legs in front of the delighted crowd.Director Ben Gregor arrived with his wife and son who no doubt was looking forward to seeing his dad’s work. – DailyMail