by Top
in Featured, Movies
0 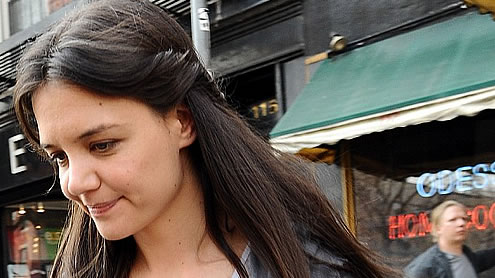 She has been pictured looking rather scruffy lately with her messy hair and baggy clothing. But Katie Holmes was back to her best on the set of her new film.

The 34-year-old looked casually stylish and groomed with her hair straightened and pinned back as she arrived on the set of the new Spike Lee movie on Wednesday in New York City. The actress showed off her slender figure in blue jeans paired with a grey peasant top as she walked along the city street. Katie kept warm with a simple blue hoodie and added a grungy touch with brown workman-style boots. The star wore her long chocolate-colored locks straight and loose over her shoulders, pinning back the front strands in a demure style. Katie Holmes appeared to be wearing no makeup, opting to rather showcase her naturally flawless complexion.  The mother-of-one was seen chatting with a brightly-dressed member of the film crew as they made their way to set.

Spike Lee was also spotted walking towards set, wearing neon green trainers and a bright blue Nike tracksuit top. Meanwhile, reports that Katie’s ex-husband Tom Cruise addressed their 2012 divorce in a German interview have been branded ‘untrue’ by his rep. The Oblivion star, 50, was quoted as saying in an interview with German TV network ProSieben that he ‘didn’t expect’ Katie to file for divorce, and that ‘life is like a tragic comedy, you need a sense of humour.’

But a spokesperson for the actor confirmed on Wednesday that the quotes were fabricated by Bunte, a German tabloid. The ProSieben interview mainly focused on Tom’s career and his experience shooting his upcoming film Oblivion in Iceland last year.  ‘For my 50th birthday [the director] Joe [Kosinski] and the studio gave me a bubble bike,’ said Tom. ‘It was so amazing … I was allowed to ride it in areas where you are no longer allowed to drive. [Iceland] is a beautiful country.’

Tom also spoke about his kids Isabella, 20, and Conor, 18, and Suri, six, stating he would be supportive if they wanted to became actors. ‘Suri, Connor and Isabella have grown up on movie sets – the door is always open for them,’ he said. – Dailymail