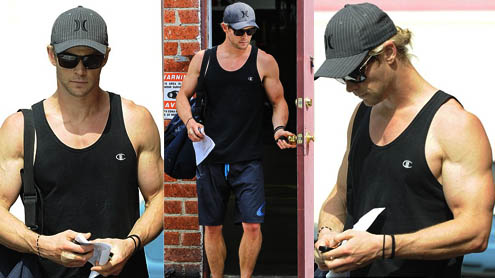 Chris Hemsworth gave his fans another thing to be thankful for on Easter Sunday went he showed off his impressive muscles.

As he left Box ‘N Burn Gym in Venice, California, the Australian actor showed off his bulging biceps in a sleeveless black top that complimented his bronzed skin.From leaving a rigorous workout, his blonde locks were swept into a low bun and covered with a pinstriped baseball cap. The Snow White and the Huntsman star teamed his tank with a pair of grey drawstring athletic shorts, accented with bright blue details, hitting above his knee to reveal his ripped calves.

And no proper fitness routine would have been complete without appropriate footwear.Matching his shorts, Chris was seen in grey sneakers that featured vibrant blue laces. Concealing his eyes from the blazing sun, Chris donned plastic-framed, jet black sunglasses as he headed to his automobile, carrying his gym duffel from his shoulder.He was seen holding onto a white piece of paper, gazing down at it throughout his stroll through the parking lot.

The Hollywood hunk endeavours to maintain a sculpted figure for the multiple film roles that he’s currently working on. The brother of actor Liam Hemsworth has reportedly been back and forth filming re-shoots for his upcoming movie Thor: The Dark World, which is set to hit cinemas in the United Kingdom on October 30 and in America November 8.He is also set to star in films In The Heart Of The Sea and Snow White And The Huntsman 2, which yet to announce a release date, as well as The Avengers 2, expected to debut in 2015.

Though he needs to maintain a masculine form for his career, he isn’t the only one in his household to engage in a regular fitness routine. Chris’ wife Elsa Pataky also worked on her figure on Easter Sunday, seen running home with her blue Pilates mat at hand after leaving a class in Venice.Dressed for the toning session, the Spanish model/actress donned a white tee and form-fitted purple leggings, as well as a grey zip-up sweater and a matching purple bandana to keep her hair out of her face.The couple have a 10-month-old daughter India together, and this will be her first Easter. – DailyMail