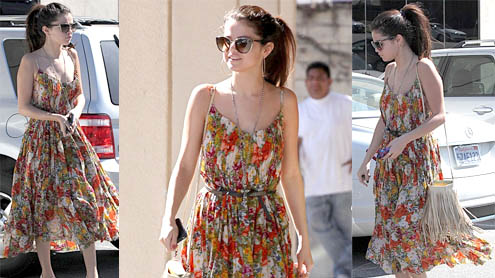 Her latest movie sees her wearing little more than a bikini.But Spring Breakers star Selena Gomez got ready for springtime in a more demure way on Thursday as she sported a floral frock.

The 20-year-old looked lovely in the thin-strap dress which was covered in flower prints and cinched in at the waist with a thin belt.With the ‘side-boob’ look being rather trendy recently, Selena avoided the style but delivered her own twist in the item which has lace-up sides.The light pleated item was perfect for the sunny weather and the material eye-catchingly swished at the bottom as she walked along in California’s Encino area.

Selena wore her brunette locks up in a high ponytail and donned large cat’s eyes sunglasses on her face, teaming her outfit with a cream tasseled bag and sandal wedges shoes to co-ordinate. The Disney star accessorized with large hoop earrings, a long cross necklace and rings on her fingers to complete her look.She spent a day running errands and stopping by a nail salon after meeting up with a female friend.

The pretty star – who split from on-and-off-again boyfriend, Justin Bieber, last year – stood out next to her casually dressed pal who fashioned red tresses. The singer-turned-actress has been busy promoting her upcoming film which will be out in theaters on March 15.Selena’s recent appearance on El Hormiguero, with co-star Vanessa Hudgens, aired the same day in Spain.On Wednesday she revealed she has been keeping busy with her music among other things.She posted on Twitter: ‘Whose ready for an album? All the songs have been decided coming to you soon.’ – DailyMail