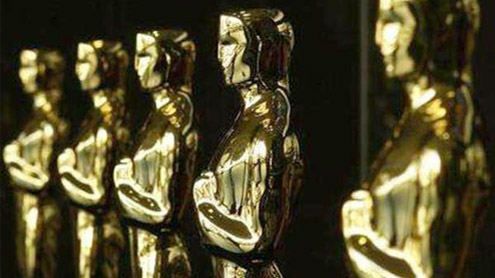 On Sunday night, American television sets will once again host the freakish masked ball known as the Oscars. Demigods will glide importantly down a synthetic staple-gunned red scroll, posing, balletically angled, while fielding questions about denim tuxedos and cocktail rings the size of iPhones.

Later some of them, on the brink of hysteria, will accept gilded statuettes, and use the word “humble” to mean “proud.”The telecast used to be called the Academy Awards—the word “Academy” was once needed to confer gravitas on Hollywood’s popcorn flicks—but just this week the event’s promoters changed its name to The Oscars. Mainstream movies are no longer nervous about being considered pseudo-art, mostly because they’re not the commercial sureshot they once were.

When an elite director like Wes Anderson all but needs an NEA grant to make a cute crowdpleaser like “Moonrise Kingdom,” and Paul Schrader (of “Taxi Driver”) has to pass the Kickstarter hat to raise dough for “The Canyons,” a Lindsay Lohan vehicle, you know something’s topsy-turvy. Movies are now long-suffering, elegiac bait for connoisseurs. They’re officially Big Art—like Broadway, or New Orleans jazz or the Art Institute of Chicago.

So that’s movies. But there are movies—three-act comedies and dramas with heroes, villains, beginnings, middles and ends—and then there are those other moving pictures that we all actually watch all the confounded time. Videos.Hollywood does not have a monopoly on videos, and that’s a good thing: Videos are not ways to entertain or mesmerize or merchandise or freeze audiences in their seats. They are ways to communicate. Someone calls your attention to a video on Facebook or YouTube, and you watch; sooner or later you are meant to make a video in return.

No platform since YouTube launched in 2005 has captured this contemporary use of video more than Twitter’s new Vine app. Vine allows users to make six-second, looping videos with their iPhones. The phone is the camera, the editing machine, and the means of distribution and display; you post your Vines to Twitter, Facebook and Vine itself, which is a visual-communication community like Instagram.When Vine appeared a month ago, I loved it. But I’m an amateur. As I tried to make my own six-second masterpieces, I wondered what actual filmmakers would make of Vine.Would they see its possibilities? Would they ignore it? Would they find it frustrating, fun, frivolous? There was only one way to find out.

To celebrate the Oscars this year, Yahoo! News asked a handful of playful filmmakers to give Vine a shot. We told them to work off the theme of the Oscars—the ceremony itself, or one of the films nominated this year, or a big winner from a previous year. The results were delightful.Adam Goldberg, @TheAdamGoldberg, the reigning virtuoso of Vine and jack-of-all-arts who stokes a captivating Tumblr, produced “Lost Weekend 2013:” an ode to Oscar (Madison)—a Vine take on Billy Wilder’s “The Lost Weekend,” the lurching chronicle of a bad midcentury bender, which was the Best Picture of 1945. Because Vines cannot be made without also being made public, he wanted until curtain time to produce his blink-of-an-eye epic, which he cast and even story-boarded, as though it were a feature film.

We got great stuff from the actor James Urbaniak, @JamesUrbaniak, (his Vine: “Oscar Party ’76”) and the documentarian Nina Davenport, too (her Vine: “Lincoln”).While almost no one gets to make a Hollywood movie anymore—that’s why we gape tonight at the lucky few—Vine is free, and open to everyone. Don’t you want to try your hand? Submit your own Oscar-inspired Vines on Twitter. Just download the Vine app, make your vine, and post with the hashtag #yahoovines.