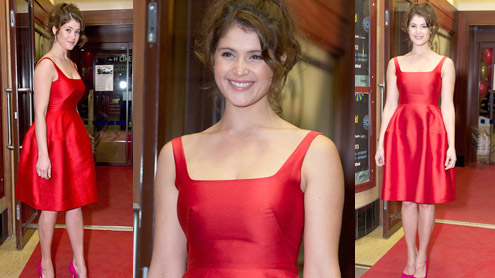 She’s pushed the boundaries with a series of edgy and fashion-forward ensembles throughout the 2013 awards season.

But Gemma Arterton took it back to basics in a simple red prom dress as she attended the UK Premiere of her movie Byzantium at the Glasgow Film Festival on Friday night.The 27-year-old actress positively exuded classic elegance with her choice of a feminine and flirty scarlet frock by CH Carolina Herrera.Highlight her enviably slim middle with an attractive cinched-in waist, the Hansel and Gretel star’s choice of red carpet outfit flaunted her showstopping curves in all their glory.The Kent-born beauty accentuated her perfect porcelain skin with the vivid colour of dress, while sweeping her auburn locks off her face to give her outfit the full attention it deserved.

Gemma showed off her flawless complexion by opting for natural make-up, while breaking fashion rules by teaming her red dress with a pair of hot pink spiked stiletto heels.The star was joined on the red carpet at the Glasgow Film Festival by her Byzantium co-star Saoirse Ronan, who opted for a particularly fashion-forward ensemble.While her asymmetric strap black bandeau dress seemed relatively straightforward from the outset, it featured an unusual sheer mint green sleeve on one arm and an emerald velvet sleeve on the other upon closer inspection.

The 18-year-old actress balanced on a pair of towering strap-detail stilettos, while letting her dyed red locks fall in loose waves around her shoulders.Gemma takes on the role of Clara Webb in Byzantium, which is set in both the 18th century and the modern day, and documents the tale of a mother and daughter vampire duo who form a deadly pact.Saoirse plays Gemma’s onscreen daughter Eleanor in the movie, which is directed by Neil Jordan and also stars Sam Riley and Jonny Lee Miller.Gemma previously said of her role: ‘She’s brittle and she’s a fighter. There’s blood and vampires and all of that, but we focus on the mother-daughter relationship.’ – DailyMail