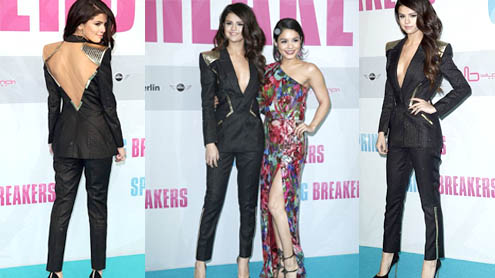 She spends a lot of time in her new film Spring Breakers wearing just her bikini.And it seems Selena Gomez has become quite accustomed to flashing the flesh as she proved on Tuesday at the German premiere of her film.

The Disney star turned heads wearing a suit with a plunging neckline and nothing beneath it, showing off plenty of skin.Showing she’s a fully-fledged movie-star now the 20-year-old opted for the powerful-looking suit which featured fierce looking gold shoulder pads.The fitted jacket cinched in at her waist showing off her slim figure, while the low-cut aspect of it meant her breasts were on display.The slim-legged trousers made her legs appear even longer than usual, as did her black stiletto heels. Her sleek dark brown hair had been styled in large curls and helped complete her overall glamorous look.

Selena looked particularly statuesque as she stood beside her co-star Vanessa Hudgens, who despite wearing heels was noticeably shorter than her co-star.The High School Musical actress looked stunning in one-shouldered multi-coloured sequined dress.While her shoulder was on display, her left leg was also as her dress featured a thigh high split. Meanwhile she wore her hair off her face in a messy ponytail and she completed her look with deep red lipstick.

The girls visit to Germany came the day after their Parisian premiere alongside their other co-stars Rachel Korine and Ashley Benson. The actresses co-star in the new film – which has yet to premiere in America or the UK- as college girls who end up in jail after robbing a restaurant to fund their spring break vacation. They later find themselves bailed out by a drug and arms dealer, played by James Franco, who wants them to do some dirty work.

For the film – which is released in the U.S. in March – former Disney star Selena spends most of her time in a bikini. She told MTV the prospect did not bother her: ‘It was so funny. The rest of the girls were in the trailer doing crunches. I didn’t mind. I didn’t care. ‘People take pictures. People already have opinions. I wasn’t there for that, necessarily. I was playing a character, so I just completely indulged myself in that.’So whether I was in a bathing suit or a turtleneck, I was fine.’