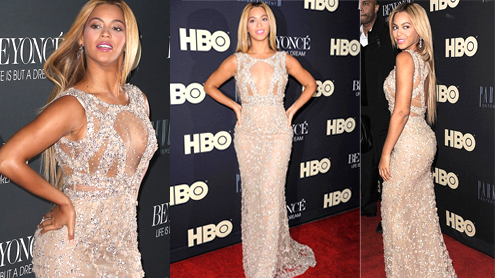 She surprised onlookers at the Grammys over the weekend when she slipped into a geometric jumpsuit which somewhat covered up her famous curves.

But for the premiere of her new documentary, Life Is But a Dream, Beyonce was back to putting on a dazzling show.The 31-year-old displayed plenty of her decolletage in a daring sheer floorlength Elie Saab gown as she stepped onto the red-carpet in New York City.The pop star’s attire featured transparent panelling at the chest and intricate detailing which just managed to cover her modesty.The entire silk nude gown was adorned with glittering sequins allowing Queen B to literally light up the red-carpet.

The mother-of-one boosted her height with nude stilettos and had a pair of extravagant drop earrings in her ears.The jewels could be seen peeking from underneath her hair, which had been coiffed in a poker straight style.Beyonce kept her make-up minimal, but lent a pop of colour with bright pink lipstick applied to her pout.While her husband Jay-Z was not present at the big premiere, she had Oprah on hand as her date.The 59-year-old stuck to her usual go to style of red-carpet dressing in a long-sleeve navy clinging dress.

The talk show queen hammed it up with the cameras as she tottered along in a pair of purple heels.Beyonce’s sister Solange nearly stole the thunder from her sister in a dress so short it could have been a top.The shirt-style design barely covered the 26-year-old’s derriere as she posed for pictures.Beyonce’s younger sibling towered over the other guests in a pair of sky-high black stilettos and carried a simple black clutch.Meanwhile, their mother Tina Knowles looked striking in a black and white pantsuit.

The 59-year-old was youthful yet sophisticated in the monochrome attire and wore her two-toned hair out in a glossy curled style.Other guests at the premiere included Angela Bassett, who opted for racy leather trousers and a floral and fur coat combination.In her documentary, Beyonce opens up about her heartbreaking miscarriage for the first time.She suffered the loss several years before the birth of her daughter Blue Ivy in January 2012.’About two years ago, I was pregnant for the first time,’ she says in the preview of the programme.

‘And I heard the heartbeat, which was the most beautiful music I ever heard in my life.”I picked out names,’ she recalls.’I envisioned what my child would look like.. I was feeling very maternal.’She lost the child in the early stages of her pregnancy.’I flew back to New York to get my check up – and no heartbeat,’ she says.’Literally the week before I went to the doctor, everything was fine, but there was no heartbeat.’The star, who married Jay-Z in April 2008, turned to music to help her get through her pain.’I went into the studio and wrote the saddest song I’ve ever written in my life,’ she says, but doesn’t name the track.

Jay-Z first revealed Beyonce suffered a miscarriage in his track Glory, which he wrote after the birth of Blue Ivy in January 2012.The lyrics included: ‘Last time the miscarriage was so tragic/We was afraid you’d disappear/But nah baby you magic’Her husband Jay-Z first referenced the miscarriage in Glory, a track recorded within days of Blue’s birth in January 2012.Beyonce was thrilled when she discovered she was pregnant again in 2011 and found it hard to keep the news to herself to begin with.

‘Being pregnant was very much like falling in love. You are so open. You are so overjoyed,’ she says.’There’s no words that can express having a baby growing inside of you, so of course you want to scream it out and tell everyone.’In one scene, she confides: ‘I felt the baby kick for the first time. Kicked five times.’After cautiously keeping the pregnancy a secret, she finally revealed her bump in spectacular fashion at the MTV Video Music Awards in August 2011.She famously rubbed her tummy during a performance of Love On Top and it went on to become the most-tweeted moments of the year.She later faced rumours she was wearing a fake bump and using a gestational surrogate.

‘A stupid rumour, the most ridiculous rumor I’ve ever had about me,’ she says. ‘To think that I would be that vain.She admitted she was ‘scared to death’ of birth, but added it’s ‘the most powerful thing you can ever do in your life.’After the delivery, she described it as ‘the most beautiful experience of my life … It was amazing … I felt like God was giving me a chance to assist in a miracle … You’re playing a part in a much bigger show.’The HBO documentary attempts to show the other, more vulnerable and human side of Beyonce.In a previous clip, she says: ‘People see celebrities and they have money and fame, but I’m a human being.”I cry, I get scared, I get nervous just like everyone else.’she shares tender and very candid moments from her pregnancy with Blue Ivy, showing her bare pregnant belly and even a sonogram of her unborn daughter. – DailyMail