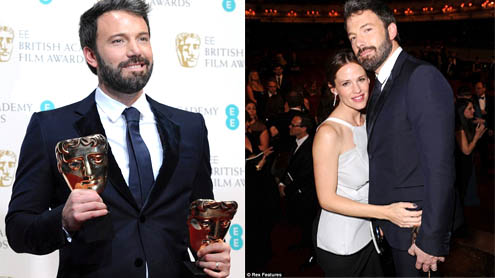 He might have been snubbed at the Oscars, but Ben Affleck had the last laugh with his latest success – when he took home both Best Director and Best Film for his hit movie Argo at the EE BAFTA awards.

The actor-turned-director admitted he was stunned with the double success at the awards ceremony, which took place at London’s Royal Opera House on Sunday night.Collecting the Best Film prize, Affleck told the star-studded audience: ‘I was talking to people from the studio and they were like “We never win!” so this really is the most incredible surprise.’Earlier, Affleck was presented with the Best Director award by Ian McKellen, and said of his prize: ‘I want to say this is a second act for me and you’ve given me that, this industry has given me that and I want to thank you and I’m so grateful and proud.’Affleck’s producer partner George Clooney later told the actor: ‘I’ve got to say Ben, if this is your second act, I don’t know what you’re going to do for your third act.

‘You really are remarkable at what you do.’Argo beat Les Miserables, Life Of Pi and Zero Dark Thirty to claim the Best Film title, while Affleck beat Quentin Tarantino for Django Unchained, Ang Lee for Life Of Pi, Kathryn Bigelow for Zero Dark Thirty and Michael Haneke for Amour for the director prize.Meanwhile, Daniel Day-Lewis was crowned Best Actor for his role in Lincoln, leading to further speculation that he will take home the Oscar for the part later this month.

Accepting his award, Day-Lewis poked fun at his own reputation for immersing himself in his characters and his devotion to method acting.We are currently experiencing some technical difficulties with this section of our site. We are doing everything we can to resolve this as soon as possible.Other sections of the site are not affected by this. You can continue to navigate through other pages.Day-Lewis, who reportedly refused to leave his wheelchair while playing the disabled Christy Brown in My Left Foot, said: ‘On the chance I might one day have to speak on an evening such as this I’ve stayed in character as myself for the last 55 years.’

Anne Hathaway took home the Best Supporting Actress prize for her role in Les Miserables, but admitted she was missing her co-star Eddie Redmayne, who was suffering from a sickness bug backstage.We are currently experiencing some technical difficulties with this section of our site. We are doing everything we can to resolve this as soon as possible.Other sections of the site are not affected by this. You can continue to navigate through other pages.Anne also thanked Victor Hugo – the writer of the original novel which inspired the musical – saying: ‘Without whom, none of us would be here.’

Brave won the best animated film prize for Disney.We are currently experiencing some technical difficulties with this section of our site. We are doing everything we can to resolve this as soon as possible.Other sections of the site are not affected by this. You can continue to navigate through other pages.The award for Best Short Film went to Swimmer which was made by We Need to Talk About Kevin director Lynne Ramsay.The Making of Longbird picked up the award for Best Short Animation.

The awards for Sound and Editing went to Les Miserable s and Ben Affleck’s Iran hostage crisis drama Argo respectively.Zero Dark Thirty star Mark Strong presented the Cinematography award to Claudio Miranda for his work on Life Of Pi which was picked up on his behalf by the film director Ang Lee.Faith was back on stage with David Morrissey to present the award for Best Original Music to Thomas Newman for Sky-fall.Lincoln star Sally Field came on stage to present the award for Original Screenplay without her presenting partner Eddie Redmayne after he was taken ill backstage.Field told the audience: ‘He seems to be puking his guts out back there.’

Quentin Tarantino picked up the award for his western Django Unchained and thanked his actors for doing a ‘bang-up job with my dialogue’.The film has attracted criticism for its liberal use of racial insults and Tarantino thanked his backers for standing by what he described as ‘a hot potato’ film.Speaking backstage, Tarantino said he saw Django Unchained as the second part in a trilogy following on from his Second World War film Inglourious Basterds.He said both films were about righting the wrongs of history, adding: ‘I think there’s something about this that begs a trilogy, three movies that go on this train and then drop it. I don’t know what the third one’s going to be yet.’

The next award, for Special Visual Effects, went to the 3D spectacular Life Of Pi.Billy Connolly came on stage to present the award for an Outstanding Debut by a British Writer, Director or Producer.Joking that he was ‘presenting an unsuspecting stranger with a death mask on a stick’, the comedian and actor gave the award to Bart Layton and Dimitri Doganis for their documentary The Imposter.The film tells the true story of Frenchman Frederic Bourdin, who posed as a missing Texan teenager so successfully that he moved in with his family and lived as him for several months.

The award for Best Adapted Screenplay went to David O Russell for Silver Linings Playbook.Trainspotting director Danny Boyle presented the award for Outstanding British Contribution to Cinema to Film Four boss Tessa Ross, who he described as a ‘shy genius’.He said: ‘I can pay her no greater compliment than to say she really is the Paul Scholes of the British film industry.’The award for Film Not in the English Language went to Amour.

The EE Rising Star Award – which is voted for by the film-going public – went to Juno Temple.The actress, who starred in Killer Joe, said it was ‘a huge, huge honour’ to win and thanked her brother, Felix, who she said ‘got his entire school to vote for me’.She also thanked her father, filmmaker Julien Temple, for inspiring her to act.Martin Freeman joined Henry Cavill on stage to present the award for Best Documentary to Searching for Sugarman – the story of two music fans looking for a little known American musician called Rodriguez whose career has been revived by the film’s success.The award for Production Design went to Eve Stewart and Anna Lynch-Robinson for their work on Les Miserables. – DailyMail