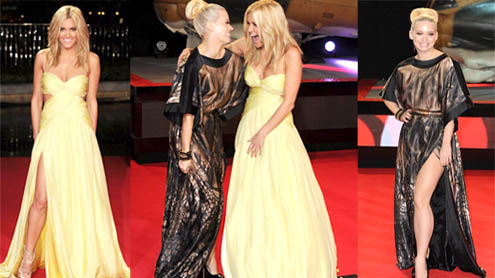 They are the best of friends so it’s no surprise to see their like similar styles and thigh high splits were the order of the evening for Ashley Roberts and Kimberly Wyatt on Thursday.

The former Pussycat Dolls band mates wore dramatic dresses at the A Good Day to Die Hard premiere in Leicester square, with each showing off their perfect pins in a slashed gown.Ashley, 31, looked stunning in a flowing yellow number with tiny spaghetti straps and cut-out detailing around her midriff.She made quite an entrance as she strut her way up the red carpet in a pair of intertwined strappy gold heels.Kimberly had also selected a leg-baring look for the evening but she wore a dark gown with cropped kimono sleeves, a high neckline and a bejewelled belt.

While Ashley made her way up the red carpet solo Kimberly was with her British model boyfriend Max Rogers.The couple, who have been together for a year, were seen smiling at each other, clearly very much in love.While Kimberly is smitten with her man she was eager to catch up with best friend Ashley and the girls were seen hugging as they greeted one another.The girls were seen having a giggle together as they cuddled up and posed for pictures.The girls have known each other for years joining the Pussycat Dolls around the same time in 2003.

When Wyatt announced she was leaving the group in 2010, Roberts quickly followed suit.Now the girls are both living in London and are no doubt enjoying being so close to one another.Ashley, who starred in the last series of I’m A Celebrity, attended Kimberly’s birthday earlier this week and the pair stayed out until the early hours dancing at Mahiki.The Pussycat pair were not the only familiar faces at the premiere, Bruce Willis the star of the film had jetted over to London to promote the flick. – DailyMail