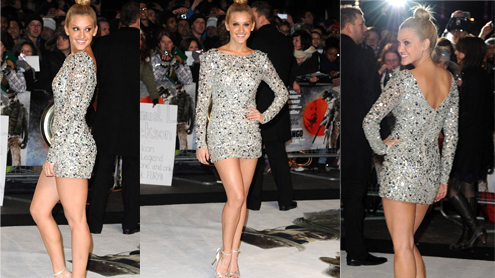 She’s currently appearing as a judge on a skating show and on Thursday night Ashley Roberts proved to be an ice queen in the style stakes.

The former I’m A Celebrity contestant shone on the red carpet in a silver mini-dress at the London premiere of Django Unchained.Ashley, 31, showed off her perfect pins in the long-sleeved garment, which was covered in shining sequins.The former Pussycat Doll had her hair in a top knot and accessorised with a pair of strappy silver heels for the screening held at Leicester Square.While Ashley was channeling a cool maiden she did bring along a piece of hot arm candy in the form of dancer and model Jason Beitel.

Ashley tweeted: ‘Django premiere 🙂 Tarantino is a Rockstar. Thx @jsnbtl for bein my hot date.’ (sic).The singer, who is currently appearing as a judge on Dancing on Ice joined the likes of the film’s stars on the red carpet including Kerry Washington, Jamie Foxx and Christoph Waltz. Ashley’s I’m A Celeb co-star Hugo Taylor also appeared at the event with his girlfriend Natalie Joel.

Tarantino admitted being disappointed that he did not receive a nomination for Best Director but said he is in good company.’That would have been pretty nice,” he said.’But I actually feel bad that Ben Affleck didn’t get nominated. I think he really deserved it too.’He added: ‘I don’t think I will win Best Picture. But if it did, I will take it for sure.’Django Unchained opens in cinemas on January 18. – DailyMail