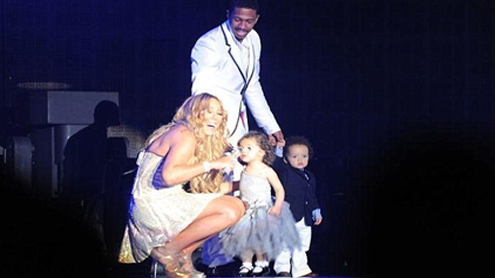 She may have been working on New Year’s Day while many people were nursing a hangover.But Mariah Carey, 42, ensured she spent the first day of 2013 with her family.

The singer brought her husband Nick Cannon and their two children up on stage during a performance on Australia’s Gold Coast on Tuesday.Mariah looked every inch the glamorous diva in a white dress with sparkling silver tassels hanging from the garment.She wore her loosely curled blonde hair down on her shoulders and work a dazzling silver watch and bracelet on her wrist which matched her glittering earrings and microphone.

The star brought her America’s Got Talent host husband Nick Cannon, 32, onto the stage and the couple were joined by their 20-month old twins Moroccan and Monroe at the Gold Coast Exhibition Centre near the city of Brisbane.Mariah had been partying with husband Nick the night before as she saw in 2013 with her beau.Tweeting her best wishes to fans from Down Under, she wrote: ‘Happy new year from Australia!!!!’

The family have enjoyed a trip around the Great Barrier Reef and a glamorous Mariah was seen tottering on high heels as she walked the plank to board the yacht.Carey’s family flew by private jet from their winter vacation getaway in Aspen, Colorado to sunny Queensland on Friday.They will soon head to Sydney for a concert on January 3 before wrapping the trip up in Melbourne on January 5.Nick is also set to perform  DJ sets before each of Mariah’s performances.