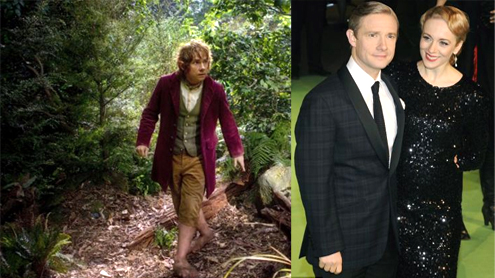 When your long-term partner and father of your two children becomes a bona fide Hollywood star, it’s hard to imagine what the downside might be.

But for Amanda Abbington there were definite drawbacks when Martin Freeman won the part of Bilbo Baggins in The Hobbit: An Unexpected Journey.True, it would give them rewards and riches beyond their imagining, but it also meant he would have to spend 18 months in New Zealand filming.‘That trip to New Zealand is a monster – 26 hours and three planes,’ says Amanda, 38, an easy-going, approachable blonde with a hearty laugh and a down-to-earth sense of humour.

‘When Martin was offered The Hobbit, we talked about it and he did think about turning it down.’Initially Freeman, 41, did reject the role. Peter Jackson’s prequel to The Lord Of The Rings may be the world’s biggest movie franchise, but the actor was locked into playing Doctor Watson in another series of Sherlock.Then, in an unprecedented move, the director agreed to halt filming for six weeks so that Freeman could return to Britain to complete the BBC drama.

Amanda says: ‘Peter Jackson said he couldn’t think of anyone else to play the part. I told Martin he had to do it and we would get through it. We said we’d speak to each other on the phone and it would be OK. But it was hard. Afterwards, we came to the conclusion we’d never, ever do that again.’Although Amanda was left behind  at their home in Hertfordshire looking after Joe, seven, and four-year-old Grace, she insists it was more difficult for Freeman.

Of course being a hobbit isn’t easy.  There’s the large feet – it took two people to help Freeman put on the gnarly, flipper-like appendages that went up to his thighs. Then there’s the ears: ‘I asked him to bring a pair home,’ says Amanda, ‘although he hasn’t put them on yet. I think he’s had enough of them for now.’And that’s not to mention the troll snot. Freeman has said: ‘Because of continuity, you’ve got to be in wet snot and then the remnants of drying snot. That’s a lot of days. It’s kind of like a hair gel. Sticky. Very cold.

‘We were on the side of a mountain with wind machines going and rain pouring down, and our wig glue and hair gel was going into our eyes. Peter would say, “Martin, can you open your eyes a little more?” I genuinely could not. It was comically uncomfortable.’Amanda, the only child of Patsy and John, a cab driver, says: ‘It was harder for Martin. I had our home and his things around me, whereas he was in a foreign country without his children, without me.

‘I managed to get out three times with the kids. Then Martin came back to film Sherlock and for Christmas, so we had little pockets of time.’While Freeman would call home complaining that he’d been ‘hanging upside-down all day and I’ve got bloody ears on’, normal life – with all its trials – carried on. And one of the hardest moments came when she found a lump in one of her breasts.She says: ‘It turned out to be nothing but it was frightening. It’s not knowing that’s the scary thing.

‘Your immediate reaction is ‘‘that’s it’’. We immediately think the worst. I had to steel myself to ring the doctor, then wait a couple of weeks for the results. Martin was going to come back but I was fine.’Amanda understands the pressures, as she is also an actress. While she may be known as Mrs Hobbit in some quarters, she has just won her own starring role in ITV’s new department-store drama Mr Selfridge.The ten-part serial is being billed as Downton Abbey with tills, yet Amanda admits she very nearly didn’t take the part (as Miss Mardle, Head of Accessories) because Freeman was still in New Zealand.

She explains: ‘I went for the audition and the next day they said, “You’ve got it.” I dreaded telling Martin because I was due to go out there.’We hadn’t seen each other for four months, which was the longest time we’d been apart. I was having to juggle work, make sure the kids were OK, make sure Martin was OK. I wondered whether I should do it but Martin said, ‘‘You’ve got to do it.The couple met on the set of a movie called Men Only in 2000, although Amanda had already seen the actor in the sketch show Bruisers and ‘really fancied him’.

It was the year before Freeman found fame playing hapless Tim in The Office.Amanda says: ‘I was sitting in the make-up bus moaning about not having a boyfriend when a call went over the radio for Martin Freeman to have his make-up taken off. He walked on to the bus and I thought, “Oh God, you’re lovely.”‘We just sort of ended up hanging out with each other. I left early and then got a message from him the next day saying, “Hi, you left and I hadn’t finished flirting with you which I thought was a little bit rude. I’ll see you later.”‘We went out on a date that day to a pub in Crouch End. It’s the only time we’ve ever been to a pub.

‘We moved in together a few months after that. He is my love. I know it sounds sickly, but he is.’While she enjoys the security Freeman’s success has given them, she is refreshingly uninterested in the trappings that go with it.At the London premiere of The Hobbit a fortnight ago, she wore a dress from Warehouse, while she often drives them to awards ceremonies in her Mini Cooper.She recalls: ‘At the Baftas last year I was so pleased because I managed to get a parking space within a  hundred yards of the red carpet. It was serendipity.’She does the driving, as Freeman hasn’t passed his test. It’s fair to say that theirs is a household untouched by Hollywood success.

Amanda says: ‘Any kind of normality is just heavenly. He might change, he’s still got two Hobbit films to come out so there’s some room for manoeuvre. But I don’t think he will – he’s very grounded. He still does the ironing; he’s  better than me.’There are no pangs about him working with Gwyneth Paltrow and Penelope Cruz. ‘It’s not an issue,’ she says. Nor is there any envy at Freeman’s success. ‘I think he’s such a good actor so it’s very easy to say, fair play, you absolutely deserve to be where you are. It would seem really petty to think, oh well, he’s done this, why haven’t I?’

However, Mr Selfridge could provide her with the breakthrough from working actor to household name. She says: ‘I’m hoping my career will start to take off a bit more now.’Not that she wants fame – only recognition. For she, more than most, understands the nerve-racking nature of success on such a grand scale. ‘I do slightly worry,’ she admits. ‘It’s daunting. The Hobbit’s a massive film but we’ve been together for a long time and whatever life throws at us, we’ll be able to get through it.’She doesn’t need to say the obvious – that if they got through that  18 months apart, they can get through anything. – DailyMail