The Extravagant Melodrama of ‘Les Miserables’ 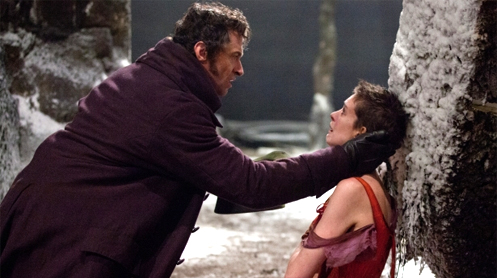 The Extravagant Melodrama of 'Les Miserables'

The words (at least the first eight of them) are from the fallen Fantine’s mournful aria in the first act of Les Misérables.

Largely faithful to the stage version, Hooper’s Les Miz is an extravagant melodrama, at once openly ambitious and almost touchingly earnest. As anyone who’s seen the film’s oddly infomercial-like theatrical trailer will be aware, Hooper has taken the innovative step of having cast members sing their numbers live on film, rather than lip-synching to pre-recorded tracks. It’s a genuine breakthrough: As the performers lift their voices, the camera holds them in intimate closeup; the experience is about as close to live theater you’re likely to find onscreen.

Alas, like so many innovators, Hooper falls rather too much in love with his innovation. The second or third time we watch a face fill the screen with notes tender or tragic, the effect is genuinely arresting. The 22nd or 23rd time…Hugh Jackman and Russell Crowe star as Victor Hugo’s ages-old antagonists: Jean Valjean, the saintly ex-con, and Javert, the pious, obstinate policeman intent on returning him to prison. The actors offer a fascinating contrast in styles. Jackman is a veteran of musical theater, with a Tony (and an Emmy for hosting the Tonys) under his belt; Crowe is an actor one doesn’t generally envision singing at all—unless it’s in a pub, with several pints under his belt.

But Jackman appears slightly confounded by the possibilities of Hooper’s up-close cinema; like Hathaway (who also has a strong voice), he often seems as though he’s trying a little too hard to act his way through his songs, with slightly disappointing results. Crowe, by contrast, though possessed of a thin, reedy instrument (indeed, one presumes because of it), focuses intently on his singing and somewhat outperforms his humble gifts. There is an odd, unexpected dignity to the sight of a man so obviously out of place and yet trying so hard to make the best of it.Amanda Seyfried plays Cosette, daughter of doomed Fantine and adopted daughter of Jean Valjean; and Sacha Baron Cohen and Helena Bonham Carter lend the proceedings a Sweeney Toddish air as the comically villainous M. et Mme.

Thenardier. But the greatest treats on offer are Samantha Barker as Eponine (also doomed, life in 19th century Paris being no picnic), and especially Eddie Redmayne as Marius, whose lament-filled “Empty Chairs at Empty Tables” is the best number in the film.Like Hugo’s famously commodious novel, Hooper’s film begins in 1815 and concludes in the proletarian rebellion of June 1832, with the intervening years stuffed full of love and loss, hardship and hauteur, ardent revolution and heartbreaking defeat.

Javert stares out at Notre Dame from the roof of the Conciergerie; the proletarian rebels crawl about the towering, moldering Elephant of the Bastille (a painful reminder, no doubt, to Baz Luhrmann that he’s not the only director who can kill off his pretty heroines with tuberculosis). The music ebbs and swells as the story rolls through its epic climax and into an extended denouement of such hokey theatricality—featuring the ascent and descent, respectively, of its principal antagonists—that it might better have been viewed from a distance, so viewers could focus on the music rather than on Jackman’s old-man makeup.

Les Misérables is a big, impressive film, and committed fans of the musical are likely to have their affections reaffirmed. The less devout, however, may conclude that in this case more is less, and fidelity not always a virtue.In Tom Hooper’s new cinematic adaptation of the beloved musical, the song is sung by Anne Hathaway, and your response to it will likely be a good barometer of your response to the film overall. Hathaway gives it everything she has, beginning in quiet sorrow before building to a woebegone climax: she gasps, she weeps, she coughs. If you are blown away by the scene—as many will be; it will almost certainly earn Hathaway her first Oscar—this may be the film for you. If, however, like me, you feel that its poignant, plaintive beginnings give way to an overwrought, ostentatious conclusion—well, you have a long 157 minutes ahead of you. – TheAtlantic