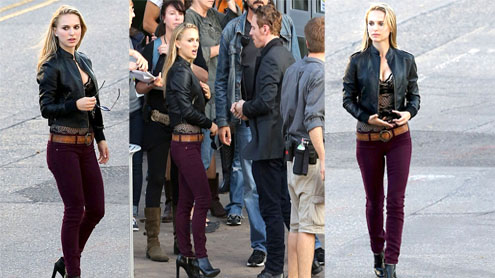 Natalie Portman’s new movie will be a steamy affair, judging by the latest photos.The Oscar winning actress looked sexy in a pair of figure hugging jeans on set of her latest movie, which was is being shot in Austin, Texas.

Under the watchful eye of husband Benjamin Millepied and their bay son Aleph, the star got ready to shoot another scene for the yet untitled Terrence Malick project on Saturday.Natalie recently wed her Black Swan choreographer and co-star Benjamin in traditional Jewish ceremony in Big Sur and wore an ethereal gown by Rodarte.

On the set, she looked just as glamorous in a far sexier outfit of skinny red trousers, a revealing black top and leather jacket.The actress seemed focused as she made her way to the set and prepared for the scene as the crew members set up the shot.Natalie was joined by her co-star Michael Fassbender, with whom she shot some tender love scenes earlier in the week.

And the actress, who once shaved her head for a film role, famously dyed her brown lock blonde for the star-studded film, which also stars Ryan Gosling, Rooney Mara, Cate Blanchett and Christian Bale.According to IMDB, the movie is set against the music scene of the Texas city and tells the story of two intersecting love triangles and the obsession and betrayal that follows.Them film’s director Terrence Malick is famous for cutting out big stars from his films.

He once angered Oscar-winner Sean Penn after completely ditching him from a project he had already filmed.The same thing happened recently to another award-winning actress, Rachel Weisz, who’s scenes in To The Wonder were left on the cutting room floor. – Dailymail