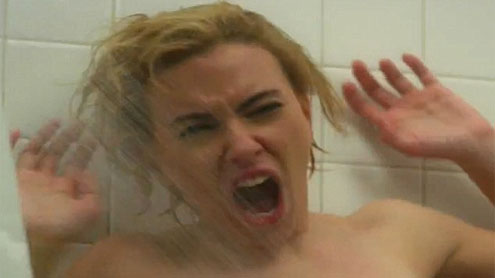 Scarlett Johansson certainly breaks the mould of the Hollywood size zero trend, and as a result her curves take centre stage in a new movie focusing on Alfred Hitchcock’s process of making Psycho.

The Prestige actress fills the role of Janet Leigh, who was famously ‘killed’ in the shower scene for her Golden Globe-winning performance as Marion Crane in the 1960 suspense/horror film.In the first look at the trailer, Scarlett’s feminine form is alluded to twice, once over a dinner meeting with Hitchcock [Anthony Hopkins] and again when the filmmaker speaks to his wife [Helen Mirren].Scarlett, 27, swans into frame during the trailer wearing in a low-cut halter neck peach satin dress, before sitting across the table from Hitchcock to discuss the role.As the New Yorker begins to gesticulate, she asks: ‘How exactly are you going to shoot this shower scene? Well, it’s only from here up I’m not exactly boyish.’

Towards the end of the footage, we also see Helen’s character Alma Reville tell her husband: ‘Ooh, you imp! You’ve got nudity in there.’To which he responds: ‘Well, her breasts were rather large. It’s a challenge not to show them.’As the trailer opens, Anthony provides an eerie voiceover, revealing: ‘All of us harbour dark recesses of violence and horror, I’m just a man hiding in the corner with a camera, watching.’

British actress Mirren plays the long-suffering wife, seen in bed reading the script: ‘It was the knife, that a moment later cut off her scream and her head, charming Doris Day should do it as a musical!’It then cuts to a business meeting, where the filmmaker is told: ‘No one respects the name Hitchcock more than Paramount, but even a talented man sometimes backs the wrong horse.’

After he’s told he can make it if he can finds the money himself, Alfred whips out his cheque book.However, the movie becomes an obsession and a financial nightmare after film bosses try to ban the film from hitting cinemas, leading to domestic troubles at home.Alfred is seen shouting at Alma, saying: ‘I’m under extraordinary pressures on this picture and the least you can do is give me your full support.’But she responds: ‘We’ve mortgaged our house. I am your wife, I celebrate with you when the reviews are good, I cry for you when they are bad.

‘The extent to which Scarlett was able to channel Janet [was] a real surprise. She brought it in such a way that no one really anticipated.’The film, which hits screens on November 23, also stars Jessica Biel as Vera Miles.The director notes that the beautiful Total Recall star faced the same challenges that Vera did to get into character.

‘Hitchcock dressed her up in a wig and did everything they could to make the beautiful Vera Miles look frumpy,’ Gervasi said.’What Hitch tried to do to Vera we tried to do to Jessica, and the results were equally ridiculous. It is not possible to make Jessica Biel dowdy.’Vera was an American actress who worked closely with Hitchcock, notably in Psycho, having played the sister of the Janet’s character, which she reprised in Psycho II. – Dailymail