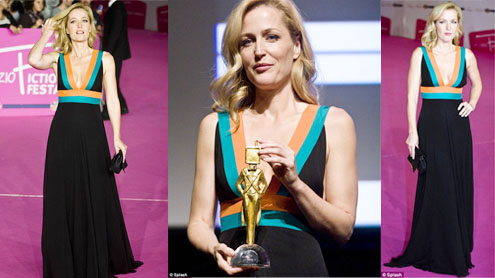 It’s been just two months since news of Gillian Anderson’s split from partner-of-six-years Mark Griffiths.But of course, in the world of entertainment, the show must go on.

And on Monday that was certainly the case as newly-single actress hit the red carpet at the 6th Rome Fiction Fest in Italy.The 44-year-old Hollywood star wowed in a plunging black gown, complete with orange and green striped detailing around the bust.Former X-Files star Gillian was out in force for the presentation of her BBC mini-series Great Expectations, in which she plays Miss Havisham.

The actress was also honoured at the event with an Excellence Award.Gillian and partner Mark announced they had split back in August.They have two young children together, Oscar, five, and three-year-old Felix.A representative for the actress confirmed the news to Us Weekly, telling the publication in a statement at the time: ‘Gillian Anderson and her partner Mark Griffiths have amicably separated after six years together.’

It is not the first time the mother-of-three has suffered heartbreak.She married X-Files assistant art director Clyde Klotz on New Years Day 1994 in a Buddhist ceremony on the 17th hole of a golf course in Hawaii.They also had a daughter Piper Maru together in September that year.Gillian recently admitted to having had lesbian flings in the past to gay magazine Out.She said: ‘I was in a relationship with a girl for a long time when I was in high school.’But the Moby Dick favourite also said she was far too attracted to men for it to something more long-lasting. – Dailymail

Kelly Monaco and Val Chmerkovskiy put on a flirty show