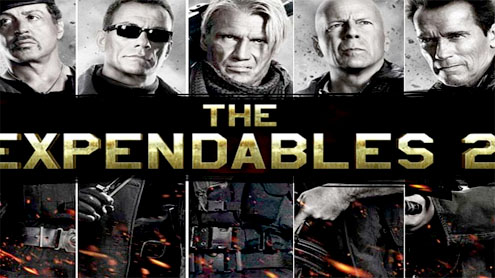 The Expendables 2 has again brought together a familiar team of ageing, muscle-bound, second-rank performers (would the collective term be a knucklehead of action heroes?) to go around the world laughing, drinking, killing and generally manning up in a characteristically macho manner.

In a pre-credit sequence, Stallone, Statham, Lundgren, Schwarzenegger and their fellow mercenaries rescue a kidnapped Chinese billionaire and mightily reduce the population of Nepal in the process.In the rest of the picture they’re blackmailed by top government agent Bruce Willis to drop into a dangerous area of the Balkans and take on a ruthless branch of the Russian mafia intimidating the area. They’re about to sell off a recently discovered stash of Soviet plutonium to the highest bidder and are led by Belgian martial artist Jean-Claude Van Damme.

In order to restore the balance of power, the Texas martial artist Chuck Norris has been parachuted in, presumably to replace Mickey Rourke, who’s dropped out of the team. Steven Seagal and Vinnie Jones are no doubt warming up in the wings for Expendables 3. Like most of the cast, Norris is a friend and fervent supporter of George W Bush, who like Stallone was born on 6 July 1946. Not many people know that.