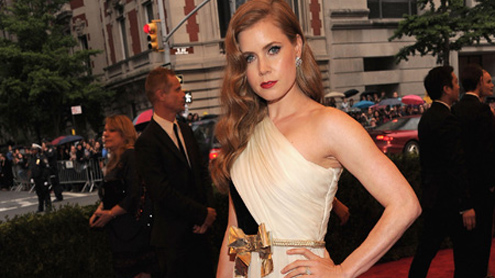 Amy Adams has reportedly signed on to star in the movie formerly known as American Bulls**t opposite Bradley Cooper.

The actress will reunite with director David O. Russell, whom she worked with on hit movie The Fighter, a role that landed her an Oscar nomination. Christian Bale was originally slated to be in the now untitled film, but he apparently dropped out this week and his role has been taken over by Jeremy Renner. The movie is about a con artist called Mel Weinberg, portrayed by Bradley, who worked with the FBI in an undercover sting operation case spanning from Atlantic City to Washington, D.C., according to Variety.

Amy is set to play Weinberg’s mistress Maxine ‘Max’ Gardner. Jeremy will portray the ambitious FBI agent, Jimmy Boyle who busts Weinberg and then enlists him to help on the case. Amy is now on stage doing Shakespeare in the Park’s Into the Woods and has also just finished filming an untitled Spike Jonze movie. She also has The Master, Trouble With the Curve and Man of Steel coming up.  Production for tentatively titled American Bulls**t is scheduled to start in February 2013.-MSN