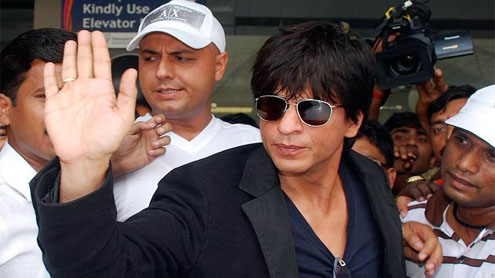 Shah Rukh Khan joined the cast and crew of Eros International and Bhansali Productions’ Shirin Farhad Ki Toh Nikal Padi to launch the music and the third teaser poster of the movie.

The poster based on SRK-starrer Dilwale Dulhania Le Jayenge had Boman Irani and Farah Khan posing as Raj and Simran. Cyrus Broacha began the event by introducing the actors to the audience. The funny man had the janta in splits through the evening. While Sanjay Leela Bhansali and Bela Sehgal Bhansali had their mom Leela for company, Farah came with her mom too.

When asked if her mom-in-law was in the audience too? She joked, “I only bring one of them out at a time.” And though this is her acting debut, she played choreographer at the event and got SRK, Boman and Bela to dance to her tunes. The film will release on August 24. – PT