The Dictator banned in more countries 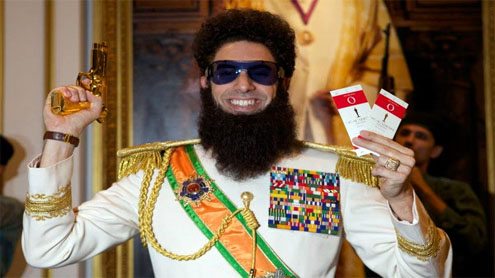 The feature, which is about a dictator who risks his life to ensure that democracy doesn’t reach the country he ruthlessly sovereigns, was released in the US last month.Some nations are not embracing the humour of The Dictator and have decided not to allow the movie to appear in their theatres.’It’s mad. The list of countries where it has been blocked from cinemas has grown since it was released,’ a source told British newspaper The Sun.

‘It’s now banned in Belarus, Pakistan, Malaysia, Tajikistan and Turkmenistan. The world’s had a humour bypass.’Sacha has spoken before about how his life was threatened while filming his 2009 film Brüno.’A bunch of Hasidic Jews ran after me with rocks and I ended up hiding in a bathroom store,’ Sacha recalled at the 2012 Cannes Film Festival to British newspaper The Mirror.

‘Normally in dangerous situations I have a getaway car. But as I ran towards the getaway car it drove away. So I found myself running down the street, running for my life, and being chased by these Hasidic nutcases. I turned round to calm them down, and I shouted in Hebrew ‘I am Jewish’, which apparently is the worst thing ever you can tell Hasidic Jews. It was then they decided that they wanted to really kill me. In those last two movies there were lots of people with guns who got angry and it became a little hairy at times.’I never felt I’d get killed but it has been close.’ – MSN