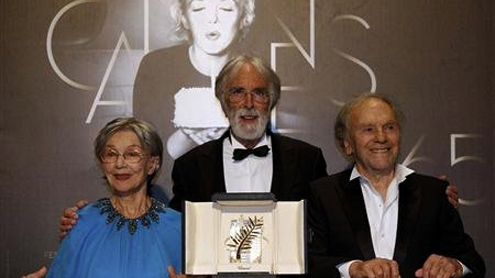 The Austrian has now won the top prize at the world’s biggest cinema showcase twice, joining a small elite of multiple winners and cementing his place as a master of film making. Slow and understated, Love’s portrayal of an elderly French couple facing the last stages of life had audiences in tears and critics rushing off to write five-star reviews virtually across the board. Its victory was particularly welcome in France, with the stars of the movie, both in their 80s, highly respected names in French cinema. “The names of Emmanuelle Riva and Jean-Louis Trintignant … will play in the public eye like a French victory,” said Le Parisien newspaper. Conspicuous in their absence from the awards ceremony that wrapped up the 12-day festival on the French Riviera were U.S. productions, five of which made it into the main competition of 22 entries.

Not even the acting talent of A-listers Nicole Kidman and Brad Pitt, alongside hot emerging Hollywood names like Jessica Chastain, Tom Hardy and Zac Efron, was enough to win over the judges led by Italian director Nanni Moretti. Turn the clock back a year, and U.S. director Terrence Malick was winning the Palme d’Or for “The Tree of Life” and Kirsten Dunst scooped the actress award for her role in Lars Von Trier’s apocalyptic epic “Melancholia”. “FEELING LET DOWN” Cannes critics were cool towards most U.S. productions, although New Zealand-born Andrew Dominik’s “Killing Them Softly”, starring Pitt as a mob enforcer in a recession-hit U.S. city, was reasonably popular. “None set the town on fire and clearly can’t count upon widespread critical support down the line,” said The Hollywood Reporter’s Todd McCarthy, in reaction to the awards.

“The feeling of letdown about these films running from vague to severe created the feeling of a mixed-bag festival.” What the strong North American presence did do, however, was put stars on the red carpet, a key ingredient to success at a film festival which thrives not only on high-brow cinema but also on glamour, fame and celebrity buzz. The other big loser on the night was French-born director Leos Carax’s “Holy Motors”, an audacious and surreal film about a man, played by Denis Lavant, who adopts 10 alternative lives in a single day. Featuring Kylie Minogue and Eva Mendes in cameo roles, as well as a character who is married to a monkey, an aroused man-monster and stretch limousines which talk at night, the movie was the main talking point of the festival as it sharply divided opinion.

In addition to Haneke, two other former Cannes winners were awarded — Briton Ken Loach won third prize for Scottish comedy caper “The Angels’ Share” and Romanian Cristian Mungiu won best screenplay for exorcism drama “Beyond the Hills”. The movie’s two young stars, Cristina Flutur and Cosmina Stratan, were surprise dual winners of the actress prize, while Danish star Mads Mikkelsen scooped the best actor prize for his portrayal of a man wrongly accused of child abuse in the harrowing drama “The Hunt”. Mexico’s Carlos Reygadas won the best director category for “Post Tenebras Lux”, a dreamlike exploration of the undercurrent of menace within Mexican society today.-Yahoonews