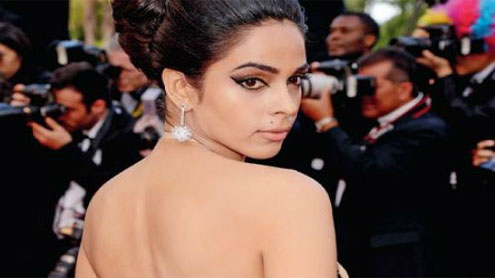 Mallika Sherawat always manages to make news at Cannes – especially for her ensembles. In fact, many people were disappointed when the sassy actor opted for a subdued look sporting a Victoria Beckham outfit at a recent event there, but not much later she did a Mallika Sherawat as always.

At the Cannes premiere of Madagascar 3, the actor went a step further with her red carpet style – she wore a nude plunging backless dress that was held together by a thin blingy belt at the waist. As for her makeup and hair, she went 70s, choosing winged eyeliner and a bouffant a la Saira Banu.

While the look was simple, Mallika’s outfit was definitely a better and more daring choice than some of dresses she wore the previous two years at Cannes. But whether her regular red carpet appearances here will fetch her more roles in Hollywood is the big question.So those who thought that Mallika had gone understated this year at Cannes now stand corrected. The lady always makes sure that at least her outfits, if not her roles, make an oomphy statement! – TOI