Bieber, Lady Gaga to appear in “Men In Black 3” 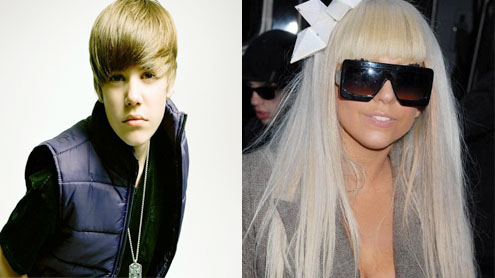 Justin Bieber and Lady Gaga in Men In Black 3

LOS ANGELES: Already convinced that Lady Gaga is a space alien? You’re about to get some confirmation.

“Born This Way” singer Gaga and “Baby” belter Justin Bieber will make brief appearances in the upcoming sci-fi sequel “Men in Black 3,” director Barry Sonnenfeld told Collider in a recent interview.Sonnenfeld said that the singers’ images will flash on the alien surveillance board at Men in Black headquarters, which in the first installment included shots of Steven Spielberg, Danny DeVito, Sylvester Stallone and George Lucas.

“I can’t remember who we had in the second one, but in this one there are a few people that you’ll see up on the surveillance board including Lady Gaga, Tim Burton, who probably knows more about aliens than I do, and let’s see who else… Justin Bieber,” Sonnenfeld said.Sonnenfeld said that there’s an art to choosing which celebrities will be exposed as extraterrestrials in the film franchise.

“ne of the joys is deciding who you would put up on the board, who you would tell the world are aliens,” Sonnenfeld said. “And A) the challenge is you have to get permission from these celebrities and B) you don’t want to go with people that are either a flash in the pan, or political, or people that then in 10 years no one will know who you’re talking about.”You mean – gulp! – we’ll still be hearing about Bieber and Gaga 10 years from now? That’s the real spine-chiller…”Men in Black 3,” which was hampered by delays, will hit the big screen on May 25.  – Yahoonews