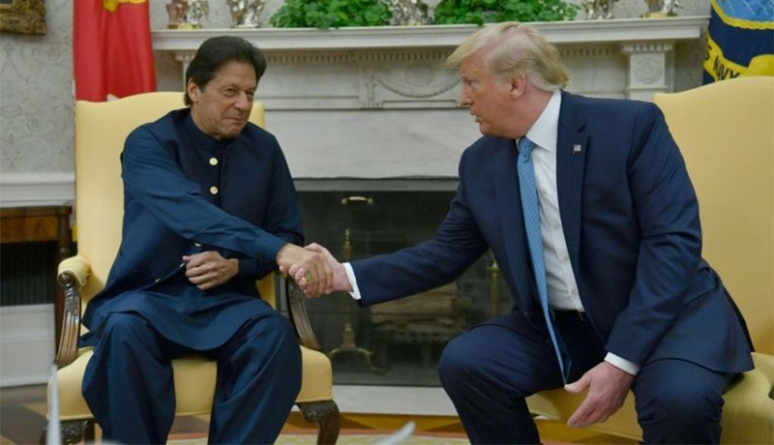 President Donald Trump on Monday hailed Pakistan s help in advancing peace talks in Afghanistan, in a marked shift in tone as the United States seeks an accord with the Taliban to end almost 18 years of war. Trump was speaking from the Oval Office alongside Pakistan s Prime Minister Imran Khan, who is on his first official visit to Washington seeking to revive a fractured relationship. Pakistan was the Taliban s chief sponsor when it took power in neighboring Afghanistan during the 1990s.

Its influence over the group, which has waged an insurgency since it was ousted from power by US-led forces in 2001, is seen as key in facilitating a political settlement with the government of President Ashraf Ghani.”We ve made a lot of progress over the last couple of weeks, and Pakistan has helped us with that progress,” said Trump.

“A lot of things are happening for the United States, and I think a lot of great things are going to be happening for Pakistan under your leadership,” he added as he turned to face his counterpart, in an encounter filled with smiles and mutual praise. The warm words signaled a clear reversal for the Republican president, who has in the past accused Pakistan of being duplicitous and last year cut $300 million in security aid. Trump took personal credit for the apparent revival of Pakistani cooperation, telling reporters: “I don t think Pakistan respected the United States, I don t think Pakistan respected its presidents.”

Khan, for his part, said: “I am one of those who always believed there was no military solution,” adding: “I have to compliment President Trump, because he has now forced people to end the war.” Following an exchange with a reporter, Trump also said he had been asked to mediate the decades-long Kashmir conflict by Indian Prime Minister Narendra Modi and would be happy to help, but his claim was swiftly denied by New Delhi.

The United States is pressing for a political agreement with the Taliban before presidential voting in Afghanistan in late September. This would clear the way for most US troops to withdraw from Afghanistan and bring an end to America s longest war. But Trump warned: “If we wanted to fight a war in Afghanistan and win it, I could win that war in a week… Afghanistan would be wiped off the face of the Earth.” The US and Afghanistan have in the past accused Islamabad of supporting armed extremist groups such as the Haqqani network, which is an ally of the Taliban. The claims are denied by Pakistan and Washington has also softened its rhetoric amid the ongoing peace process.

Days before Khan s visit, Pakistani authorities detained Hafiz Saeed, the alleged mastermind of the 2008 Mumbai attacks, in a move hailed by Trump as a result of the pressure applied by his administration — though he has been arrested and let go in the past. Shamila Chaudhary, a senior fellow at the New America think tank and a former National Security Council official, told AFP that Khan s visit amounted to “a reward for good behavior for following through on the Taliban talks.”