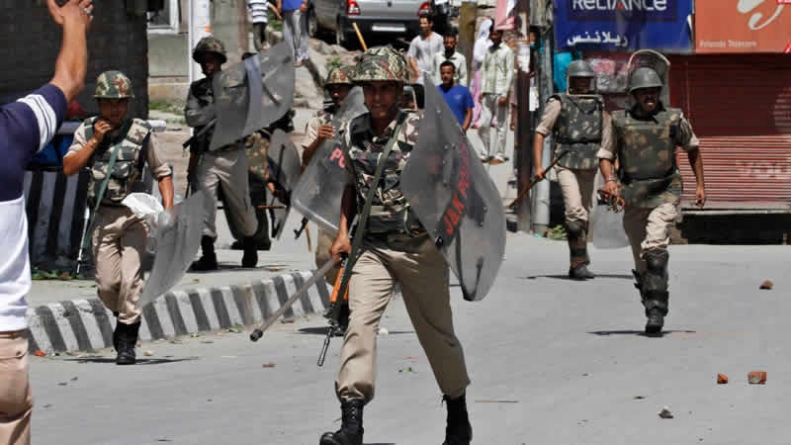 At the UN Human Rights Council (UNHRC) in a right of reply, the Pakistani delegate asked India to respond for the Council’s information that.

Can India deny that the situation in Kashmir is an internationally recognized dispute on which there are number of UN resolutions? Can India deny that the UN has expressly called for the holding of an impartial plebiscite to ascertain the wishes of the Kashmiri people? Can India deny there are over 700,000 military and para-military forces deployed in IOK, which amounts to a shocking ratio of 1 military person to 70 civilians? Can India deny that since 1989 around 100,000 civilians have been killed in IOK and that there are well documented reports of mass graves a proof of fake encounters in which indigenous Kashmiris have been killed using the false pretext of infiltration? Can India deny that in the most recent indigenous uprising in the wake of Burhan Wani’s extra-judicial killing on 8 July, over 100 Kashmiris have lost their lives, 10,000 injured and over 700 injured in their eyes due to pellet guns causing either complete or partial blindness for life time?

Can India deny that the entire valley of Kashmir is under curfew since past two months? In Pakistan’s second right of reply, the Indian delegation was again challenged on account of his inability to own up to the incontrovertible fact that the terrible situation in IOK flows from the nature of the Indian occupation and their unceasing oppression of the Kashmir people. Even in their own parliament, individuals have accepted that Indian policies were at the root of the misery of Kashmiris. Pakistan emphatically asked the international community to come to the aid of the Kashmiri people against an Indian state, which refuses to see reason and denies the facts on ground in IOK. The UNHRC chief had said on Tuesday that the deteriorating situation in occupied Kashmir has made it crucial to establish an independent and impartial international mission.

He said that he had requested the governments of India and Pakistan to allow teams from his office both sides of the Line of Control, after receiving reports that Indian authorities had used excessive force against the civilian population, and a large number of people had been killed and wounded. I believe an independent, impartial and international mission is now needed crucially and that it should be given free and complete access to establish an objective assessment of the claims made by the two sides,” he said. He also said that he had received a letter last Friday from the government of Pakistan formally inviting him to send an OHCHR team, but had yet to receive a similar request from India. He regretted the lack of response by India to his request for access to its controlled part of the disputed state and had called for unconditional access to both sides of the Line of Control.