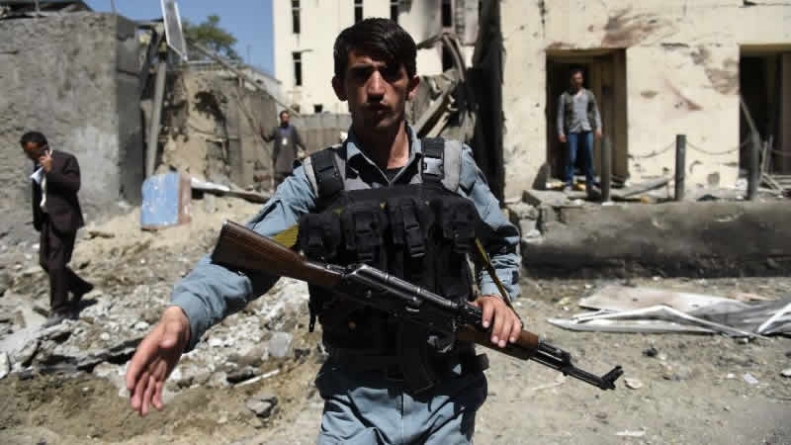 Explosions rang out Tuesday during an hours-long attack on an international charity in Kabul, the latest assault in a wave of violence in the Afghan capital that has killed at least 24 people and wounded dozens.

The assault on CARE International began late Monday with a massive car bombing, just hours after the Taliban carried out a brazen double suicide attack near the defence ministry.

A plume of smoke rose over the upscale neighbourhood of Shar-e Naw after the raid on the charity, located next to the office of Afghanistan’s former intelligence chief Rahmatullah Nabil. It remains unclear which compound was the intended target of the attack, which left piles of rubble and shards of broken glass strewn across the area. An armed group launched an attack on what is believed to have been an Afghan government compound located close to the Kabul office of CARE,” the charity said, adding that its staff had been safely evacuated.

The incident continued through the early Tuesday morning with damages sustained to the CARE compound.” The interior ministry said 42 people including 10 foreigners were rescued and added that no one was killed in the attack, revising its earlier toll of one fatality. Our new investigation shows… only six people were wounded,” the ministry said in a statement, adding that all three assailants had been gunned down by Afghan forces. No militant group has so far claimed responsibility for the raid on the charity, but it comes as the Taliban ramp up their nationwide offensive against the US-backed government. The attack had been preceded by twin Taliban blasts that killed at least 24 people during the city’s rush hour on Monday, including high-level officials, and left 91 others wounded.

The second of the two explosions struck just as soldiers, policemen and civilians hurried to help the victims of the first blast, which occurred on a bridge near the ministry. High-level defence officials were among those killed, including a young military officer and further compounding the tragedy, his mother also died as soon as she heard of his death. Colonel Ahmed’s mother died of a heart attack after hearing of her son’s martyrdom,” former deputy interior minister Ayub Salangi tweeted. “She lost two other sons before him.” Ambulances rushed to the scene, littered with disfigured bodies and charred debris. But there were so many bodies that some had to be taken to hospitals in car boots and the back of police pickup trucks. Firemen raced to retrieve some bodies thrown into the Kabul River by the intensity of the first blast on the bridge. Health ministry spokesman Waheed Majroh said the casualties from the double bombing could rise still further as some of the wounded battled for their lives in hospital.

The enemies of Afghanistan have lost their ability to fight the security and defence forces of the country,” President Ashraf Ghani said on Monday, condemning the twin blasts. That is why they are attacking highways, cities, mosques, schools and common people.” Taliban spokesman Zabihullah Mujahid said on Twitter the defence ministry was the object of the first attack, while police were targeted in the second. The violence comes more than a week after 16 people were killed when militants stormed the American University in Kabul. Earlier in August two professors from the university, an American and an Australian, were kidnapped at gunpoint near the campus. Their whereabouts are still unknown and no group has publicly claimed responsibility for the abductions. The uptick in violence in the capital comes as the Taliban escalate nationwide attacks, underscoring the worsening security situation and the heavy price paid by civilians since NATO forces ended their combat mission at the end of 2014. Afghan forces backed by US troops are trying to head off a potential Taliban takeover of Lashkar Gah, the capital of the southern opium-rich province of Helmand. The Taliban have also recently closed in on Kunduz — the northern city they briefly seized last year in their biggest military victory since the 2001 US invasion — leaving Afghan forces stretched on multiple fronts.