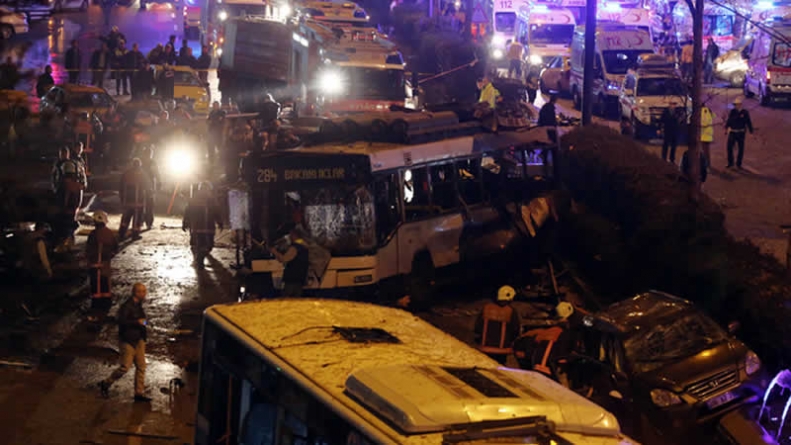 A car bomb ripped through a busy square in central Ankara on Sunday, killing 34 people and wounding 125, officials said, the latest in a spate of attacks to hit Turkey.

Ambulances rushed to the scene on Kizilay square, a key commercial and transport hub close to the city’s embassy area, where the blast reduced several vehicles, including a bus, to burnt-out wrecks.

The attack comes weeks after the city was hit by a suicide car bombing on Feb 17 targeting the military that killed 29 people, claimed by a dissident faction of the banned Kurdistan Workers’ Party (PKK). The health minister said there were 34 dead and 125 wounded in Sunday’s attack. “The blast was caused by a vehicle packed with explosives close to Kizilay square,” an official statement said. Medical sources said the wounded had been taken to 10 hospitals around the city, with a dozen said to be in a very serious condition.

Turkey has been hit by a spate of deadly attacks since the middle of last year, most of them blamed on the militant Islamic State (IS) group, including a double suicide bombing in Ankara in October that left 103 people dead. Coming so soon after the February bombing, Sunday’s attack will raise fresh questions about Turkey’s ability to manage the twin security threat posed by IS and Kurdish rebels, as Ankara presses the European Union to speed up its membership process in return for help with the migrant crisis. The Kurdistan Freedom Falcons (TAK), linked to the PKK, said it carried out the February bombing in Ankara in revenge for operations by the Turkish military in the southeast of the country and warned foreign tourists not to visit the country.

A two-year ceasefire between the government and Kurdish rebels collapsed in the middle of last year and since December security forces have been waging a major campaign against the PKK in the southeast of the country. Strict 24-hour curfews were imposed in a number of Kurdish-dominated towns and cities to allow the military and police to pursue the fight against fighters who had dug trenches and put up barricades. Sunday’s attack came hours before curfews were due to take effect in two more towns in the southeast as a prelude to fresh military operations.

Authorities said restrictions would be slapped on Yuksekova, near the Iranian border, and Nusaybin, on the frontier with Syria, to “restore order and security” following an increase in “terrorist activity”. Meanwhile, an Ankara court ordered a ban on access to Facebook, Twitter and other sites in Turkey, after images from the car bombing were shared on social media.

This author has not added a biography. Meanwhile Top has contributed 2053 posts. Click here to view them.