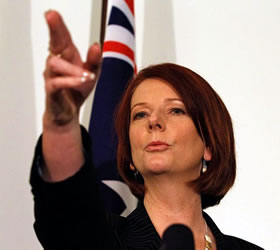 Australian Prime Minister Julia Gillard on Tuesday claimed her Labor Party was best placed to run a stable minority government after the election dead heat, warning of political gridlock if a consensus is not found.

Gillard also said she was not in favor of calling a fresh election to resolve the impasse thrown up after neither of the country’s main parties won a majority at the August 21 polls.

Labor and the conservative opposition are now in a race to win the support of four independent lawmakers to cobble together the parliamentary numbers needed to form a government.

Australia’s struggle to forge a government has failed to unsettle financial markets: the Australian dollar is almost unchanged from its pre-election level and stocks have lost only 0.5 percent since the vote.

Investors are mostly worried that an economic slowdown in the United States and Japan could spill over into Australia.

However, a raft of strong economic data on Tuesday affirmed expectations that Australian growth data to be released on Wednesday will show annual growth of 2.8 percent and confirm a run of 19 straight years without a recession.

The parliamentary deadlock has also failed to fire up voters. There have been no political protests, and the story has disappeared from the front pages of the nation’s newspapers.

Gillard, who became Australia’s first woman prime minister after a Labor Party leadership coup in June, said the next government needed to find ways of building consensus and support in parliament — and she was best placed to deliver.

“If the new government doesn’t find new ways to establish consensus and parliamentary support, then we will have gridlock, and we will quickly look more like Washington than Westminster,” she said in a speech to Canberra’s National Press Club.

Election-count projections point to the conservatives ending up with 73 seats and Labor 72, with the four independents and one Green MP who has already said he favors Labor in the race to gather the 76 seats needed to govern the 150-seat lower house.

The big parties’ courtship of the independents could drag into next week. According to one newspaper report, independent Rob Oakeshott’s office was receiving 1,000 calls a day and his personal mobile registered 1,700 missed calls in four days.

Bookmakers are tipping a win for Abbott’s coalition. Many investors hope they are right given his pledges to scrap a proposed mining profits tax and carbon-trading plans, and a $38 billion broadband project that could hurt dominant telecoms provider Telstra.

“At the moment the market is hanging on the belief that the coalition will probably get up, and that’s helped mining stocks,” said Shane Oliver, head of investment strategy at insurer and asset manager AMP, which manages $85 billion in Australia.

Local mining stocks have outperformed other sectors since the election on hopes that Gillard — and her mining tax — will go.

Miners that stand to benefit from scrapping the tax plan include Rio Tinto, BHP Billiton, Xstrata and Fortescue Metals Group.

Political experts have dismissed the market’s reaction as wishful thinking and point out that most of the independents favor some Labor policies over the conservative agenda.

However, the four “kingmakers” have threatened to force fresh elections should they lose faith in both sides’ ability to deliver parliamentary reform and stability.