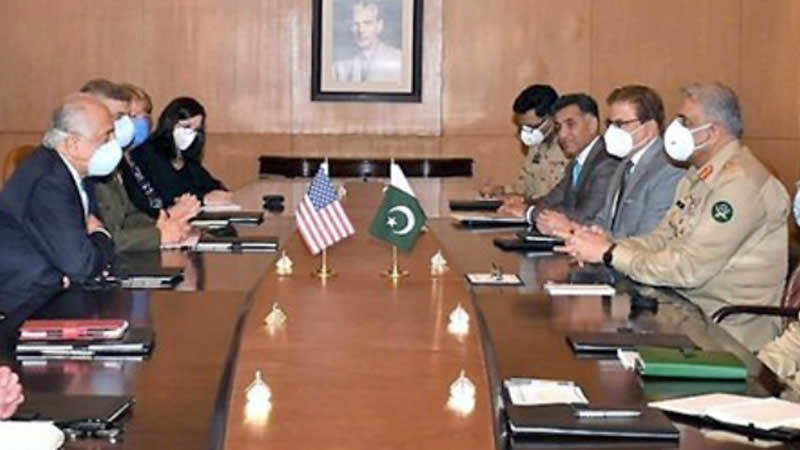 The top US diplomat spearheading peace efforts in Afghanistan on Monday arrived in Islamabad and held talks with the Pakistan’s military leadership, as violence continued to wreak havoc in the neighbouring country amid efforts to find a political solution to the unrest.

Khalilzad frequently travels to the region as part of the US efforts to seek a political solution to America’s longest foreign war started a month after the September 11, 2001 attacks.

An official handout issued by the Inter-Services Public Relations (ISPR) said regional security situation and Afghan peace process – with a particular reference to border management – as well as the way forward for a lasting peace in Afghanistan were discussed during the meeting.

“Visiting dignitary appreciated Pakistan’s untiring efforts for facilitating the process towards the mutual objective of peace in the region,” the statement concluded.

Although, no further detail was provided, the flurry of visits by the top US diplomat is part of efforts to convince the Taliban for a ceasefire or at least reduction in violence.

The Taliban have so far refused to agree on a truce, insisting that a ceasefire would be part of the overall agreement that may be reached through an intra-Afghan dialogue.

As intra-Afghan talks are under way in Doha, there is no letup in violence in Afghanistan.

Afghanistan on Monday was rocked by another deadly terrorist attack. This time terrorists targeted the Kabul University, killing students and teachers.

The Afghan Taliban, however, distanced themselves from the Kabul university attack. Pakistan was also quick to condemn what it called a mindless terrorist attack.

“Pakistan strongly condemns the mindless attack at Kabul University today, resulting in loss of so many precious lives and injuries to many more. This act of terrorism is particularly despicable as it targeted an institution of learning,” the foreign office statement said.

“We extend our deepest sympathies and heartfelt condolences to the families of the victims and wish speedy recovery to the wounded. Our thoughts and prayers are also with the Afghan people in this hour of grief and sorrow,” the statement further read.

No Complaints of Hardship from Pakistani Diaspora in France, says FO

US Votes on Trump’s Fate under Threat of Election Turmoil

US Votes on Trump's Fate under Threat of Election Turmoil