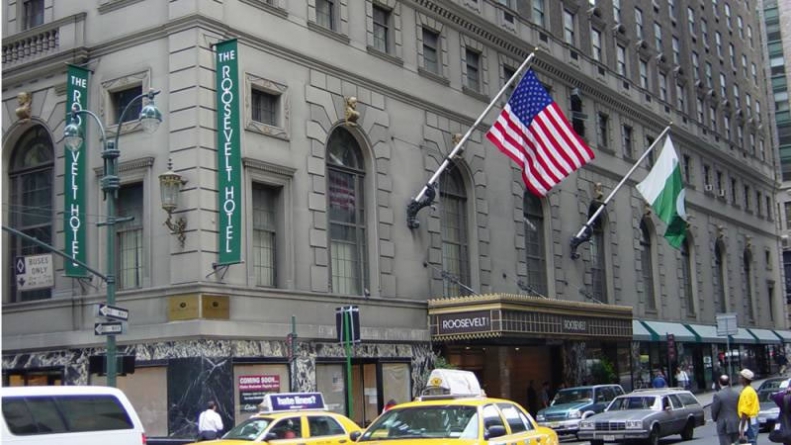 The Roosevelt Hotel, a Pak­istani possession in the heart of Manhattan, announced on Thursday it would shut its doors on guests permanently on Oct 31.

“Due to the current economic impacts, after almost 100 years of welcoming guests to The Grand Dame of New York, The Roosevelt Hotel, is regretfully closing its doors permanently as of Oct 31, 2020,” the announcement said.

A hotel spokesperson, when asked for comments, said: “Yes, it is closing down as announced on the website.” Asked why, she said: “Email your questions and we will respond.”

The message on the website said that the hotel was “working on alternative accommodations” for guests with future reservations.

“We have been honoured to serve alongside our wonderful staff and to be a part of our many guests’ and clients’ lives and celebrations, who have graced us over these past nine decades,” the hotel said.

“We have enjoyed being as much a part of our guests’ stories as we have been an integral part of the history of Midtown Manhattan since 1924.”

Officially, the Pakistan Embassy is referring all inquiries about the hotel to PIA, which owns the hotel. “We have not been informed yet,” an embassy spokesman said.

Diplomatic sources, however, explained that the PIA still owned the property as the building had not been sold.

“The hotel has been closed like other hotels in the area because the coronavirus pandemic has almost killed the hotel industry,” one such source said.

The sources explained that the building was still valued at more than a billion dollars. “Pakistan now has two options, sell it or convert it into a condominium like other Manhattan hotels hit by Covid-19,” another source said.

In July 2020, the Cabinet Committee on Privatisation (CCoP) decided against privatising the hotel and to run it through a joint venture instead.

A meeting of the committee was chaired by Adviser to the Prime Minister on Finance Dr Abdul Hafeez Shaikh to review the one-point agenda — the privatisation.

The CCoP directed the Privatisation Commission to hire the services of a financial adviser to start the process for the transaction, as proposed by an accounting firm, Deloitte, in July 2019. The firm recommended that “the highest and best use of the Roosevelt Hotel property is to redevelop the site into a mixed-use [property] (through joint venture) of primarily an office tower over retail and condominium.”

The Roosevelt Hotel, which was opened on Sept 23, 1924, was built by Niagara Falls businessman Frank A. Dudley and operated by the United Hotels Company.

The PIA leased the hotel in 1979 through its investment arm, PIA Investments Ltd, with an option to purchase the building after 20 years. Prince Faisal bin Khalid bin Abdulaziz Al Saud of Saudi Arabia was one of the investors in the 1979 deal.

In 1999, the PIA exercised its option and bought the hotel for $36.5 million. In 2005, the PIA bought out its Saudi partner in a deal that included the prince’s share in Hotel Scribe in Paris in exchange for $40 million and the PIA’s share of the Riyadh Minhal Hotel. The PIA has since controlled 99 per cent interest in the hotel while the Saudis have only 1pc.