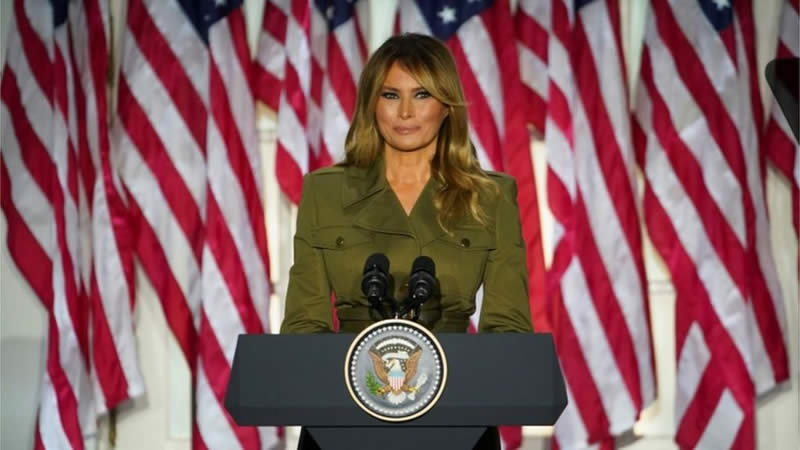 US First Lady Melania Trump has made a heartfelt plea for racial unity in a live speech from the White House to the Republican party convention.

“Stop the violence and looting,” she also said as protests continued over a police shooting in Wisconsin.

Mrs Trump urged Americans to stop making assumptions based on race and reflected candidly on US history.

What did Melania Trump say?

The normally limelight-shunning US first lady delivered Tuesday evening’s keynote address before a small audience, including her husband, in the Rose Garden of the White House.

“Like all of you, I have reflected on the racial unrest in our country,” she said.

“It is a harsh reality that we are not proud of parts of our history. I encourage you to focus on the future while still learning from the past.”

She added: “I urge people to come together in a civil manner so we can work and live up to our standard American ideals.

“I also ask people to stop the violence and looting being done in the name of justice, and never make assumptions based on the colour of a person’s skin.”

Tuesday’s convention schedule began with a prayer for Jacob Blake, the 29-year-old black man shot multiple times in the back by police in Wisconsin on Sunday.

Mr Trump tweeted a call for the Midwestern state’s governor to bring in the National Guard as unrest continued following the shooting.

The president has often been accused by opponents of stoking racial tension, though black speakers at the opening night of the Republican convention emphatically denied he was racist.

In her speech, Mrs Trump also expressed compassion for Americans worried about the coronavirus outbreak, which has killed more than 178,000 Americans.

“I know many people are anxious,” she said. “Some feel helpless. I want you to know you’re not alone.”

She praised her husband as a someone who “makes no secrets about how he feels about things”.

“Total honesty is what we as citizens deserve from our president. Whether you like it or not you always know what he’s thinking.”

Her decision to speak from the seat of presidential power has angered Democrats, who said the venue was an inappropriate use of government resources.

If the first night of the Republican National Convention was about addressing the president’s perceived weaknesses among American voters – on the coronavirus pandemic, racial issues and overall empathy – Tuesday focused on motivating his base, from anti-abortion activists to Christian conservatives.

Meanwhile, the president flexed his executive powers from the White House in two extraordinary norm-stretching bits of political theatre – issuing a pardon and taking part in a naturalisation ceremony.

First Lady Melania Trump wrapped up the evening from the newly renovated Rose Garden. She was one of the few to directly express sympathy for those who have suffered from Covid-19. It was a stark contrast with White House economist Larry Kudlow, who talked about the pandemic in the past tense earlier in the night.

Unless something changes in the coming months, coronavirus will be at the top of voters’ minds when they cast their ballots.

And while red meat for the base is useful, public perception of the president’s handling of the virus – and its economic fallout – will factor heavily in deciding his political fate.