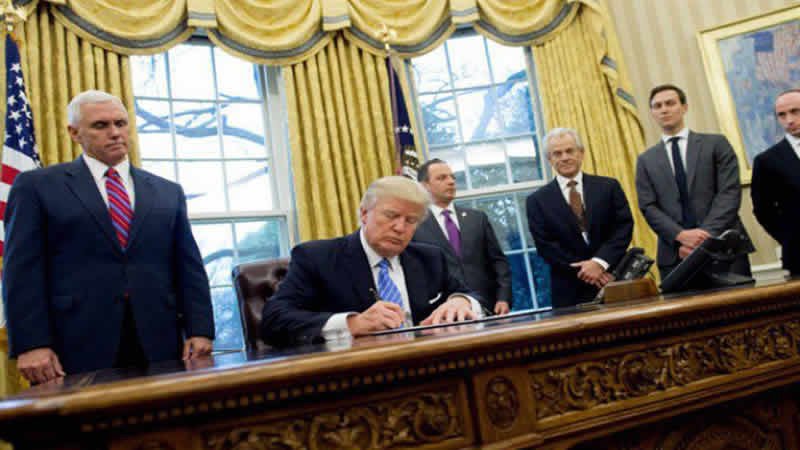 US President Donald Trump on Monday signed a revised ban on travellers from six Muslim-majority nations, scaling back the order to exempt Iraqis and permanent US residents.

After his first wide-ranging and controversial restrictions were slapped down by the federal courts, Trump signed an order freezing new visas for Syrians, Iranians, Libyans, Somalis, Yemenis and Sudanese citizens.

The White House said Trump signed the order behind closed doors “this morning”. The measure is due to come into effect on March 16. Secretary of State Rex Tillerson called the executive order “a vital measure for strengthening our national security”. Attorney General Jeff Sessions added at a joint press conference that it “responsibly provides a needed pause so we can carefully review how we scrutinise people coming here from these countries of concern”. Three of these nations are state sponsors of terrorism,” Sessions added, referring to Iran, Sudan and Syria, adding that others had served as “safe havens” for terror operatives.

The first version temporarily closed US borders to all refugees and to citizens from seven mainly Muslim countries. The State Department initially cancelled 60,000 visas, and hundreds of people were reportedly detained at US airports. The new order explicitly exempts Iraqis, legal permanent residents and valid visa holders. Iraq’s inclusion had risked scuttling cooperation between Baghdad and Washington in fighting the Islamic State group. The US and Iraqi militaries are currently fighting side-by-side in northern Iraq, trying to wrest the city of Mosul from jihadist control.

The Iraqi Foreign Ministry on Monday expressed its “deep satisfaction” with the new executive order, and described it as an “important step” in strengthening relations between Baghdad and Washington. Trump’s first order had sparked a legal, political and logistical furore. There was chaos at major airports and mass protests while several district courts moved to block its implementation and lawmakers expressed opposition. The troubled rollout also dominated the first weeks of his administration, leaving many with the impression that it was badly planned and badly implemented.

Trump has argued that the ban is needed to prevent Islamic State and al Qaeda fighters from reaching US soil. Polls show that American public opinion is deeply divided on the issue. Most indicate a slight majority of voters opposed, with strong support among Trump’s political base. The Republican president criticised a court order suspending the ban as “a very bad decision, very bad for the safety and security of our country. The rollout was perfect”. He vowed to challenge the matter in the courts, but appears to have eased away from that claim. The new order is meant to address complaints raised by the federal judges that parts of the first version were unconstitutional. But Democrats and organisations like the American Civil Liberties Union again voiced outrage. The only way to actually fix the Muslim ban is not to have a Muslim ban,” said Omar Jadwat, director of the ACLU’s Immigrant Rights Project.