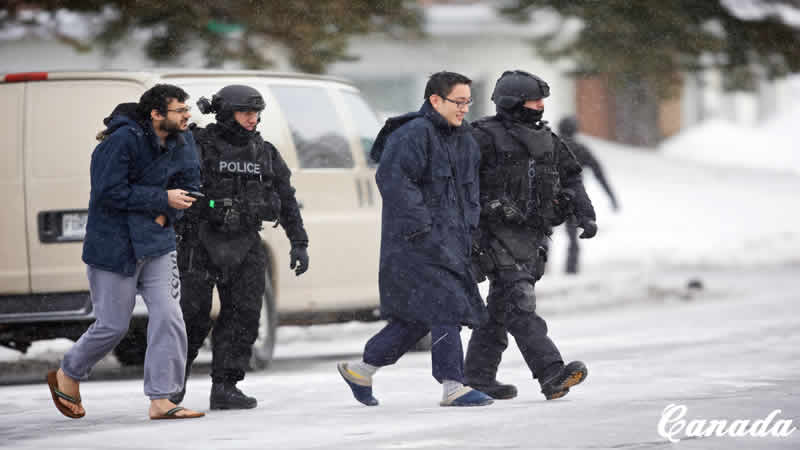 Gunmen stormed into a Quebec mosque during evening prayers and opened fire on dozens of worshippers, killing six and wounding eight in what Canadian Prime Minister Justin Trudeau condemned as a “terrorist attack”.

She gave no indication of the identities or nationalities of the two suspects. One witness told Radio Canada that “the two men were wearing black cagoules”, and one of them “had a strong Quebecois accent”. Some 50 people were in the mosque when the shooting began at around 7.30pm on Sunday (0030 GMT Monday) toward the end of evening prayers, Coulombe said. Several minutes later, police descended on the Saint-Foy district – an area packed with offices and shops some 10km west of the city’s historic centre. The mosque has already been the target of hate: a pig’s head was left on the doorstep last June during the holy month of Ramazan.

Other mosques in Canada have been targeted with racist graffiti in recent months. The shooting comes as Canada has vowed to open its arms to muslims and refugees after US President Donald Trump’s controversial immigration ban Friday prompted travel chaos and outrage around the world. People fleeing the mosque ran barefoot through the snow. They arrived in a panic,” said Louis-Gabriel Cloutier, the manager of a cafe across the street who watched worshippers fleeing the rampage. Some took refuge at the cafe. “I never thought that such a thing could happen,” said a man, who frequents another of the city’s 10 mosques. He had ventured to the scene because “I know people who were inside”.

Ambulances treated the wounded at the scene. Police reconstructing the events later questioned witnesses in a sports centre near the mosque. Trudeau issued a statement saying “we condemn this terrorist attack on Muslims in a centre of worship and refuge”. “Muslim-Canadians are an important part of our national fabric, and these senseless acts have no place in our communities, city and country,” he said. It is heart-wrenching to see such senseless violence,” he added. “Diversity is our strength, and religious tolerance is a value that we, as Canadians, hold dear.” Quebec Premier Philippe Couillard said in a series of Twitter posts that the government was mobilised to ensure the security of the people of Quebec. Quebec categorically rejects this barbaric violence,” he wrote.

“Solidarity with Quebec people of Muslim faith.” Condemning what he called an “odious attack”, French President Francois Hollande said it’s the spirit of peace and openness of the people of Quebec that the terrorists wanted to hit. Police stationed near the mosque told AFP that they had feared this type of attack because it’s happening all over the world. For us Muslims, Quebec and Canada had been a safe zone,” said Hamid Nadji, who learned of the shooting from a friend and rushed to the mosque area. Canada will offer temporary residence permits to people stranded in the country as a result of Trump’s order, the immigration ministry said Sunday.

“Let me assure those who may be stranded in Canada that I will use my authority as minister to provide them with temporary residency if needed as we have done in the past,” Immigration Minister Ahmed Hussen told a news conference. Trump has suspended the arrival of all refugees to the United States for at least 120 days and barred entry for 90 days to people from seven Muslim-majority countries: Iran, Iraq, Libya, Somalia, Sudan, Syria and Yemen. Although Hussen, who is of Somali origin, did not condemn the US measure, he stressed that Canada would continue to pursue an immigration policy based on compassion while also protecting the security of its citizens. Canada has welcomed more than 39,670 Syrian refugees between November 2015 and early January 2017, according to government figures. -dailytimes

Kaabil, Raees To Release In Pakistan On February 3