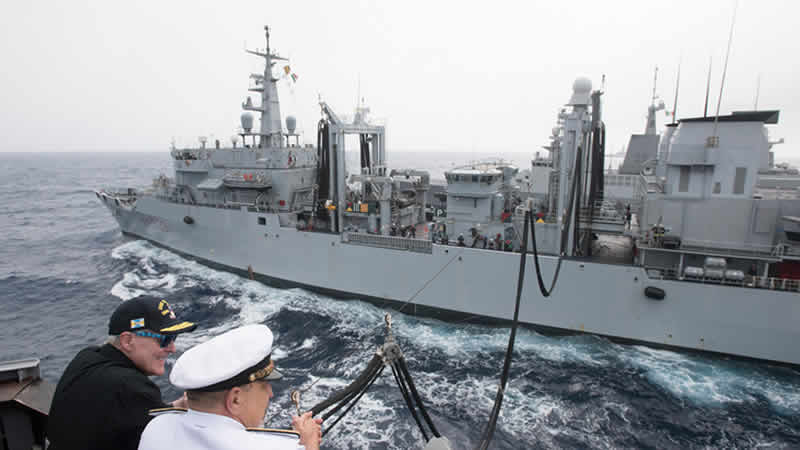 US: Navy ship targeted in missile attack from Yemen

Saudi military base also targeted by missile fired deep inside the kingdom near holy city of Mecca. A US Navy destroyer has been targeted in a failed missile attack from territory in Yemen controlled by Houthi rebels, a US military spokesman says.

In another attack, a ballistic missile launched from Yemen apparently targeted a Saudi air base near the Muslim holy city of Mecca, Saudi and rebel media reported Monday, the deepest strike yet into the kingdom by the rebels and their allies. Two missiles fired failed to hit the US Navy ship after being launched on Sunday, Pentagon spokesman Captain Jeff Davis told Reuters news agency. USS Mason detected two inbound missiles over a 60-minute period while in the Red Sea off the coast of Yemen. Both missiles impacted the water before reaching the ship,” he said.

“There were no injuries to our sailors and no damage to the ship.” Earlier this month Yemeni fighters said they hit a vessel in the Bab al-Mandeb Strait that was operated by the United Arab Emirates military, which is part of an Arab coalition fighting in support of Yemen’s government against the Houthis. There were no casualties reported in that attack. On Monday, Saudi state television aired a brief clip of what appeared to be a projectile landing in Taif and the flash of an explosion, followed by images of emergency vehicles. Taif is home to Saudi Arabia’s King Fahad Air Base, which hosts US military personnel training the kingdom’s armed forces. The Saudi military said the missile fired late Saturday caused no damage.

The US military’s Central Command, which oversees troops in the Middle East, did not immediately respond to a request for comment. The missile attacks follow the killing of at least 140 Yemenis in air strikes on a funeral reception in the capital Sanaa on Saturday. More than 500 others were wounded. The Arab coalition fighting the Houthis denied responsibility but said it would investigate the attack, which was condemned by UN, EU, and the United States. The Saudi-led coalition is battling Houthi fighters and their allies in support of President Abd Rabbu Mansour Hadi’s government. Since March 2015, the Arab alliance has pushed the opposition fighters out of much of Yemen’s south, but they still control nearly all of the country’s Red Sea coast, as well as chunks of territory around the capital Sanaa. More than 10,000 people, including many civilians, have been killed since the conflict began.