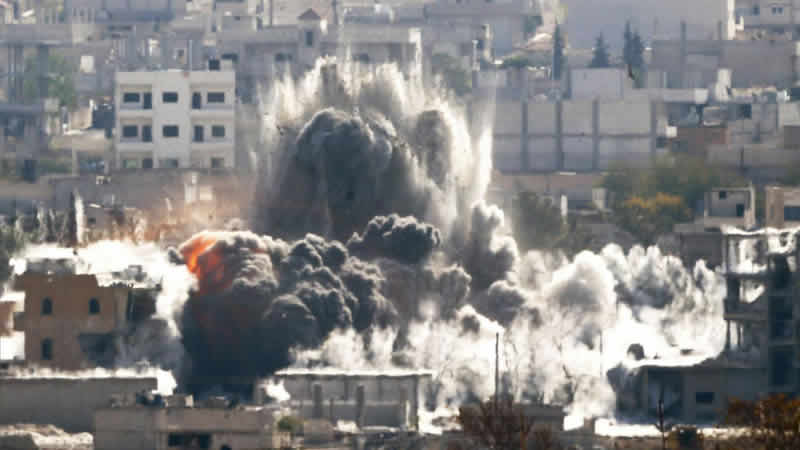 Children were among at least 56 civilians killed in strikes by a US-led coalition on Tuesday near a Syrian village held by the Islamic State group, a monitor said.

The civilians had apparently been mistaken for militants and were bombed while fleeing fighting in Al-Tukhar in Aleppo province, according to the Britain-based Syrian Observatory for Human Rights.

“There are at least 56 dead, including 11 children, and dozens more wounded, including some in critical condition,” said Observatory director Rami Abdel Rahman. The monitor – which relies on a network of sources inside Syria for its information – says it determines what planes carried out raids according to their type, location, flight patterns and the munitions involved. Asked about the strike, the coalition said it had “conducted air strikes near Manbij… recently” and that it was looking into the reports alleging civilian casualties. As with any allegation we receive, we will review any information we have about the incident … such as the proximity of the location” to coalition air strikes, it wrote in an email to AFP.

We take all measures during the targeting process to avoid or minimise civilian casualties or collateral damage and to comply with the principles of the Law of Armed Conflict.” Al-Tukhar lies 14 kilometres (nine miles) north of the town of Manbij, a key IS stronghold that has been repeatedly targeted in raids by the US-led coalition. On Monday, the Observatory said 21 civilians had been killed in coalition raids in the area, 15 of them in a northern district of Manbij and another six in Al-Tukhar. Manbij sits on IS s main supply route between Syria and neighbouring Turkey and has been the target of a US-backed offensive by a Kurdish-Arab alliance of fighters since May 31.

In June, the Syrian Democratic Forces alliance broke into western districts of the town, but their advance has been slowed in the past month because of landmines planted by the jihadists and ongoing suicide attacks. The US-led coalition said in a statement on Tuesday that SDF fighters had captured an IS “command centre and logistics hub” in western Manbij on Sunday. It said the fighters had also seized “a significant amount of the city during the operation, which provided civilians the opportunity to escape.” SDF fighters control around a quarter of Manbij, according to the Observatory. Near Aleppo, meanwhile, government forces sought to tighten their siege of rebel-held districts of the battleground second city.

Clashes erupted around Handarat, a largely deserted Palestinian refugee camp north of the city, after government forces seized parts of the only remaining supply route into rebel-held eastern districts, effectively severing them from the outside world. The capture of the Castello Road has raised fears of a lengthy siege of east Aleppo, where residents have already reported food shortages and rising prices. The Observatory said fierce clashes were under way around Handarat Camp, which is less than two kilometres (barely a mile) from the northern outskirts of the city.

If the regime takes Handarat, it will be able to completely asphyxiate the rebels in east Aleppo, and they will be unable to launch counter-attacks to retake the Castello Road,” Abdel Rahman told AFP. Elsewhere in Aleppo province, 12 civilians were killed in strikes on the rebel-held town of Atareb, said the Observatory. Analysts have warned that the government advances around Aleppo could be “devastating” for the rebels. And the United Nations has raised concern about the fate of the more than 200,000 people still living in rebel-held districts. It said relief supplies had already been stockpiled in the city, but “further life-saving aid is needed urgently.”