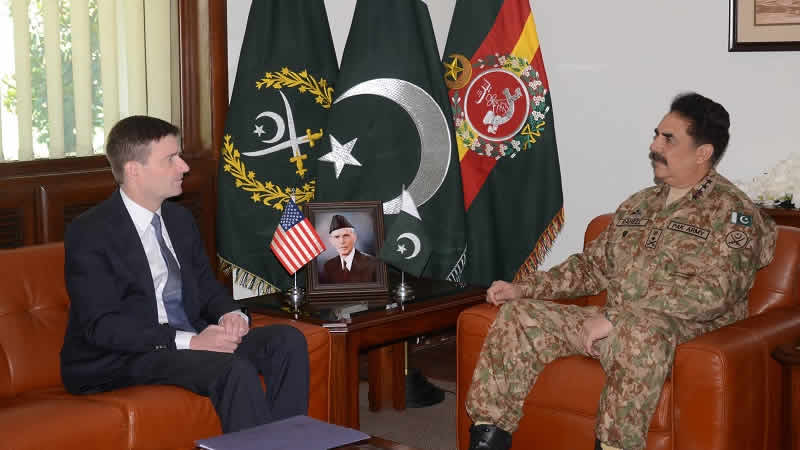 Gen Raheel seriously concerned' over violation of sovereignty by US

Chief of Army Staff (COAS) General Raheel Sharif in a meeting with United States (US) Ambassador to Pakistan David Hale on Wednesday expressed serious concerns over the US drone strike in Balochistan in which Afghan Taliban chief Mullah Akhtar Mansour was reportedly killed.

The Army chief said the drone attack, which was a violation of sovereignty, was detrimental to Pak-US ties and regional stability and damaged peace efforts, an Inter-Services Public Relations statement said. The COAS said Pakistan’s efforts, successes and sacrifices in the fight against terrorism are unparalleled. The US drone strike was the first-ever in Balochistan, which has long been a ‘red line’ for Pakistan.

While the government has long condemned drone strikes, terming them a violation of Pakistan’s sovereignty, it had already conveyed a set of ‘red lines’ to the US in 2010, specifically mentioning attacks in Balochistan as a no-go area. Hale called on the Army chief at General Headquarters. The situation arising after the US drone strike in Balochistan came under discussion during the meeting.

Prime Minister Nawaz Sharif criticised the US drone strike on Sunday, describing it as a violation of Pakistan’s sovereignty. A strong protest has also been lodged with the US over the attack. Mansour was reported killed in Pakistan on Saturday when his vehicle was struck by a US drone in Balochistan, believed to be the first time a Taliban leader was killed in such a way inside Pakistani territory.

The US and Afghan governments said Mansour had been an obstacle to a peace process that had ground to a halt when he refused to participate in peace talks earlier this year. Instead, he intensified the war in Afghanistan, now in its 15th year. On Tuesday, Interior Minister Chaudhry Nisar Ali Khan said that the government cannot confirm yet that the person killed in the incident in Balochistan was Afghan Taliban chief Mullah Mansour. Rejecting the argument that Mullah Akhtar Mansour was the major hurdle in talks between the Afghan Taliban and Kabul, he said said that the Murree dialogue could not have taken place if he had acted as a spoiler.