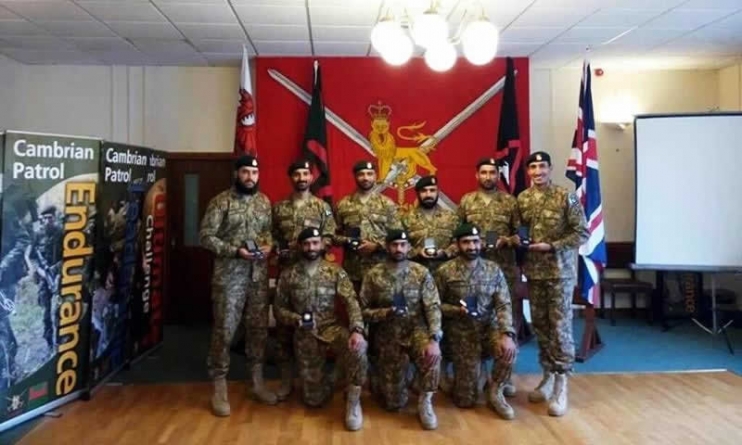 A team of Pakistan Army won the gold medal in the premier patrolling event of the British Army – Exercise Cambrian Patrol – beating around 140 teams from armies across the globe.

The international patrolling exercise, an annual event organised and run by the 160th Infantry Brigade and Headquarters Wales, is both physically and mentally demanding and is a highlight in the British Army’s training calendar.

Internationally, it is regarded as one of the toughest tests the modern-day soldier can face, with some overseas entrants having to claim the right to take part by winning their own domestic competition. The first place award is shared by the Pakistan Army with the Royal New Zealand Army. This year’s exercise, which took place between October 16 and October 25, has seen Bosnia taking part for the first time, aiming to navigate their way through some of the harshest terrain in the Welsh Black Mountains. Patrol commanders were given a set of orders based on a specific scenario, for onward briefing to members of their patrol before they are taken to a number of insertion points in the hills. The exercise is split into seven phases with soldiers marching a mind-and-muscle sapping 55km, carrying full personal kit and equipment, weighing in at some 60lbs, on the two-day patrolling mission. Navigating both by day and night, the patrols face many testing and specialist challenges, including observation and reconnaissance of enemy forces, cold river crossings in full kit without access to boats, first-aid and an enemy attack.

At the completion of the exercise each patrol faces a comprehensive debriefing session on their mission and performance. Military skills, stamina and dedication are constantly evaluated during the patrol and marked with a system of points. Teams that successfully complete their mission are awarded a gold, silver or bronze medal or a certificate of merit, depending on the total number of points they have gained. Exercise Cambrian Patrol began in 1959, when a group of Welsh Territorial Army soldiers designed a weekend training event featuring long-distance marching over the Cambrian Mountains and culminating in a shooting match on the Sennybridge training area. On arriving at the assembly area, teams are subjected to a thorough check to ensure that they are in possession of the correct kit, equipment and clothing required for the exercise.

This year there was a record number of international patrols, with teams from New Zealand, Poland, Pakistan, Czech Republic, France, Denmark, Australia, Holland, Ireland, India, Canada, Chile, Brazil, The Royal Army of Oman, USA, Poland, Switzerland, Lithuania, Nepal and Georgia. The exercise, open to regular, reserve and international teams is considered one of the most arduous and prestigious military events, testing a candidates’ leadership, field craft, discipline and both mental and physical robustness. Set up over 50 years ago by Welsh reservists, teams of eight are required to cover over 50km carrying an average of 30kg over the most unforgiving Welsh terrain in less than 48 hours. Each patrol is set within the context of a narrative which often involves teams having to traverse enemy territory and interact with friendly and not so friendly civilians or militia groups. Patrols are tested on everything they encounter on the route during a debrief upon reaching the finishing point.