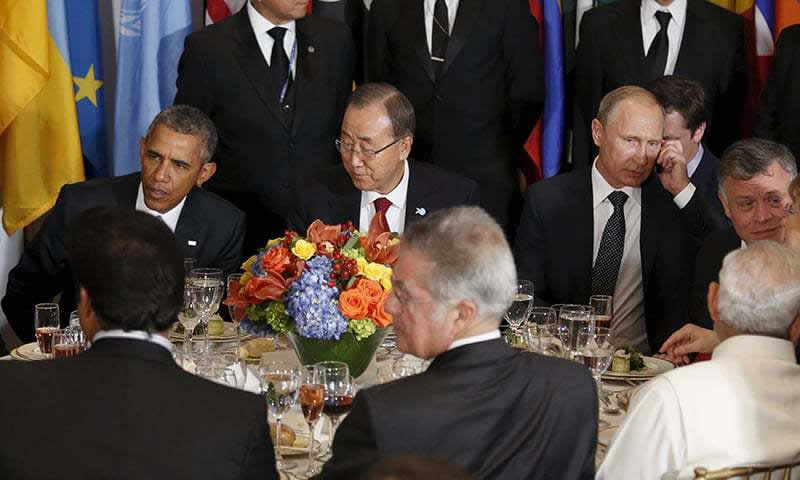 U.S. President Barack Obama and Russian President Vladimir Putin clashed Monday over their competing visions for Syria, with Obama urging a political transition to replace the Syrian president but Putin warning it would be a mistake to abandon the current government.

Obama and Putin’s dueling speeches at a United Nations General Assembly summit served as a public preview of their private meeting late Monday. The sit-down marks their first face-to-face encounter in nearly a year and comes amid escalating Russian military engagement in Syria. Obama said he was open to working with Russia, as well as Iran, to bring Syria’s civil war to an end. He called for a “managed transition” that would result in the ouster of Syrian President Bashar Assad, whose forces have clashed with rebels for more than four years, creating a vacuum for the Islamic State and other extremist groups. “We must recognise that there cannot be, after so much bloodshed, so much carnage, a return to the prewar status quo,” Obama said. Putin, however, urged the world to stick with Assad, arguing that his military is the only viable option for defeating the Islamic State.

“We believe it’s a huge mistake to refuse to cooperate with the Syrian authorities, with the government forces, those who are bravely fighting terror face-to-face,” Putin said. Obama and Putin’s disparate views of the grim situation in Syria left little indication of how the two countries might work together to end a conflict that has killed more than 250,000 people and resulted in a flood of refugees. Despite Obama’s staunch opposition to Assad remaining in power, the U.S. has struggled to energise a political process to push him from power. Russia has long been a major obstacle, shielding Assad from U.N. sanctions and continuing to provide the Syrian government with weapons. In fact, Russia has appeared to deepen its support for Assad in recent weeks, sending additional military equipment and troops with the justification that it is helping the government fight the Islamic State.

The military buildup has confounded U.S. officials, who spent the summer hoping Russia’s patience with Assad was waning and political negotiations could be started. While Putin didn’t call out the U.S. by name, he criticised efforts to arm “moderate” rebels in Syria, saying Western-backed fighters have later come to join the Islamic State. The U.S. has little to show for its efforts to build a moderate Syrian ground force that can effectively fight the extremists. A $500 million Pentagon program was supposed to train and equip more than 5,000 fighters, but has instead successfully produced only a handful. Obama and Putin each framed his case for Syria’s future in the context of a broader approach to the world, launching veiled criticisms at each other. The U.S. president criticised nations that believe “might makes right,” and he sought instead to highlight the benefits of diplomacy. He touted his administration’s efforts to restore ties with Cuba after a half-century freeze and the completion of a nuclear accord with Iran, noting that Russia was a key partner in negotiating the Iran deal.