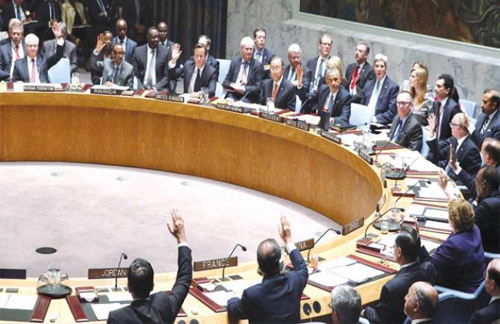 US President Barack Obama recruited new allies to an international coalition to defeat a jihadist “network of death” in Iraq and Syria on Wednesday. “

The United States of America will work with a broad coalition to dismantle this network of death,” Obama told the UN about the Islamic State group. “Today I ask the world to join in this effort.”

“We will use our military might in a campaign of air strikes to roll back ISIL,” Obama declared, using the acronym for the former Islamic State of Iraq and the Levant, since renamed the Islamic State. Overnight, US-led air raids targeted IS fighters threatening the Kurdish regional capital in Iraq and damaged eight militant vehicles operating in eastern Syria near the Iraqi border.  The US-led campaign — Saudi Arabia, Bahrain, the United Arab Emirates and Jordan have hit targets in Syria and France in Iraq — took center stage at the United Nations. At a UNSC meeting chaired by Obama, the 15-member council unanimously adopted a US-drafted resolution that compels countries to “prevent and suppress” the recruitment and travel of militant fighters to foreign conflicts.

It requires all countries to adopt laws that would make it a serious crime for their nationals to join jihadist groups such as Islamic State and Al-Nusra Front, or risk economic sanctions or military action. The UN action was prompted by the rise of Islamic State and al Qaeda’s Syrian wing, Nusra Front. Some 12,000 fighters from more than 70 nations have travelled to Syria and Iraq to fight with extremist groups, experts say. The resolution is under Chapter 7 of the UN Charter, which makes it legally binding for the 193 UN member states and gives the Security Council authority to enforce decisions with economic sanctions or force. On Tuesday, the Pentagon said air raids and cruise missiles had killed the Khorasan group of Al-Qaeda veterans, allegedly plotting an “imminent” attack against US and Western interests. US aircraft have carried out 198 air strikes against the jihadist group in Iraq since August 8 and 20 in Syria since Monday.

Al-Qaeda’s Syrian branch, the Al-Nusra Front, said Wednesday that it was evacuating its bases and positions in the northeastern Syrian province of Idlib. Ahrar al-Sham, a key Islamist rebel group allied with Nusra, was also evacuating its positions in the region, the Syrian Observatory for Human Rights monitoring group said. Obama later hailed the “political vision” and inclusive nature of new Iraqi Prime Minister Haidar al-Abadi as the two leaders met for the first time. He used his talks with Abadi to portray the new prime minister as the right kind of leader for Iraq as it struggles to expel radicals from the Islamic State group from its territory with the help of US strikes. More than 40 countries have aligned themselves with the US-led campaign but a question mark hangs over Iran, which backs the Iraqi government but is also an ally of Syrian President Bashar al-Assad.

American planes pounded Islamic State positions in Syria for a second day on Wednesday, but the strikes did not halt the fighters’ advance in a Kurdish area where fleeing refugees told of villages burnt and captives beheaded.
A US official earlier said Fadhli, an associate of al Qaeda founder Osama bin Laden, was thought to have been killed in the first day of strikes on Syria. The Pentagon said any confirmation could take time. Syrian Kurds said Islamic State had responded to US attacks by intensifying its assault near the Turkish border in northern Syria, where 140,000 civilians have fled in recent days in the fastest exodus of the three-year civil war. Washington and its Arab allies killed scores of Islamic State fighters in the opening 24 hours of air strikes, the first direct US foray into Syria two weeks after Obama pledged to hit the group on both sides of the Iraq-Syria border.

However, the intensifying advance on the northern town of Kobani showed the difficulty Washington faces in defeating Islamist fighters in Syria, where it lacks strong military allies on the ground. “Those air strikes are not important. We need soldiers on the ground,” said Hamed, a refugee who fled into Turkey from the Islamic State advance. Mazlum Bergaden, a teacher from Kobani who crossed the border on Wednesday with his family, said two of his brothers had been taken captive by Islamic State fighters. “The situation is very bad. After they kill people, they are burning the villages.

When they capture any village, they behead one person to make everyone else afraid,” he said. “They are trying to eradicate our culture, purge our nation.” Fighting between Islamic State militants and Kurds could be seen from across the border in Turkey, where the sounds of sporadic artillery and gunfire echoed around the hills. The initial days of US strikes suggest one aim is to hamper Islamic State’s ability to operate across the Iraqi-Syrian frontier. On Wednesday US-led forces hit at least 13 targets in and around Albu Kamal, one of the main border crossings between Iraq and Syria, after striking 22 targets there on Tuesday, said the Syrian Observatory for Human Rights, a body which monitors the conflict in Syria. -nation