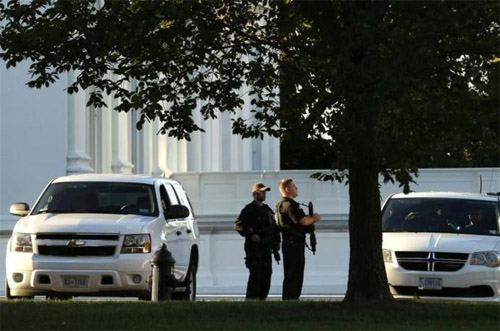 A man who broke into the White House last week had more than 800 rounds of ammunition in his car, and had been arrested in July with a rifle and a map on which the mansion was marked, a bail hearing has been told.

Federal prosecutor David Mudd told a federal judge on Monday that police found the ammunition, two hatchets and a machete in the car of Omar Gonzalez after his arrest on Friday.

The court was also told of Gonzalez’s previous arrests – police found 11 guns including rifles and shotguns in the car of the 42-year-old when he was arrested in July in Virginia for reckless driving. Mudd said Gonzalez also carried a map of Washington, tucked inside a Bible, with a circle drawn round the White House and the Masonic Temple in Alexandria, Virginia. [contentblock id=2 img=adsense.png]

In August, Gonzalez was stopped but not arrested, while walking along the south fence of the White House with a hatchet in his waistband, the hearing was told. The US secret service, which protects the president, is conducting an internal review of how Gonzalez was allowed to breach the presidential mansion’s security. Mudd said Gonzalez’s “preoccupation with the White House and accumulation of large amounts of ammunition … renders him a danger to the president”.

He argued against bail for Gonzalez, who was still in custody on Monday. Gonzalez, who fought in the Iraq war, faces 10 years in prison for unlawfully entering a restricted area while carrying a knife. Deliberations will continue in Washgington’s district court on October 1. -aljazeera