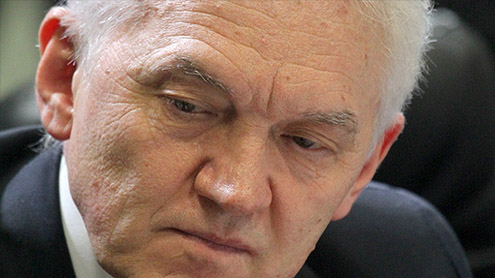 Russian markets took another knock Friday as sanctions imposed by the U.S. over the annexation of Crimea began to hit oligarchs and their businesses.

Moscow’s MICEX index fell more than 2% — taking its losses for the year to 14%. The ruble was steady, after dipping early in the day, but has still lost about 10% since the start of the year. The U.S. added more senior Russian officials and a bank to its list of targets Thursday, including Yuri Kovalchuk, described by U.S. officials as President Vladimir Putin’s personal financier. And President Obama warned Moscow the U.S. would target key sectors of the economy if Russia escalates the crisis in Ukraine.

Russian leaders earlier this week laughed off Western sanctions, which remain largely focused on disrupting the travel plans and freezing the personal assets of about 40 officials, some from Ukraine. But the targeting of powerful figures close to Putin, and a company — Bank Rossiya — shows that the U.S. at least is ready to take more serious measures.

Europe will add a dozen more names to its list of sanction targets Friday, a source told CNN, but won’t include companies, reflecting divisions among the European Union’s 28 members and fears about the impact of a trade war on the region’s fragile economic recovery.Europe has much more to lose than the U.S. in terms of trade, investment and financial exposure to Russia if economic sanctions are imposed. Still, Russia would come off worst, and its faltering $2 trillion economy could stall this year, analysts say.

Standard & Poor’s said Thursday it could downgrade Russia’s sovereign credit rating, and Fitch did the same Friday, warning growth could fall way below 1% this year as a consequence of the crisis. “Since US and EU banks and investors may well be reluctant to lend to Russia under the current circumstances, the economy may slow further and the private sector may require official support,” it said.-CNN