A Reunion Dinner At USA in Houston from the Ravians 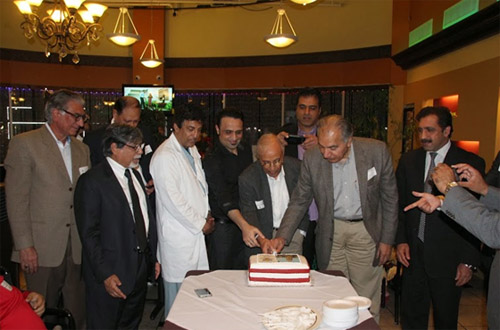 The function was coordinated and organized by Mr. Sheikh Muhammad Awais (Session 1965-69), Mr. Shahzad Chohan (1968-72) and Mr. Sajjad Burki (1967-71). It was very enthusiastically attended by the Ravians and their spouses. Amongst other distinguished guests were Honorable Mr. Afzaal Mahmood , the Consul General of Pakistan in Houston; Mrs. Saadia Altaf Qazi, Head of the Chancery; Syed Fawad Ali Shah, Commercial Attache from the Consulate of Pakistan who attended this auspicious function.  Mr. Javed Iqbal, represented Abdalians of USA and several few others graced the occasion.

They were excellent role models for all Ravians to come. The proactive role played in building character of Ravians and of our nation cannot be forgotten. He said that whatever we are today and successful in various walks of life are because of our schooling, education of our College, our worthy teachers and such role models. 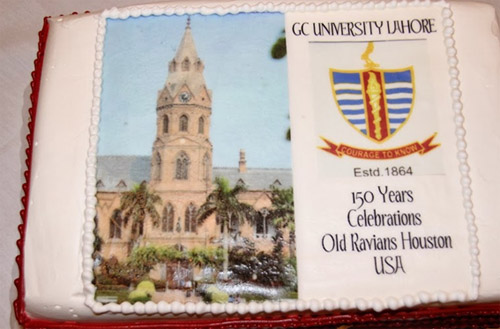 Mr. Awais also announced the beginning of 150 Years Celebrations of Government College, Lahore by requesting the senior most Ravians present on the occasion, Mr. Aslam Ilahi and Mr. Khalid Rasheed (Session 1950-52) to cut the cake. In the end Mr. Awais acknowledged some of the prominent Ravians, without their encouragement, supported and strength such an dignified gathering would not have been possible. He recognized the names of Dr. Asaf Riaz Qadeer, Mr. Shahzad Chohan, Mr. Sajjad Burki, Dr. Javed Ashraf (Ph.D), Mr. Anwar-i-Qadeer, Mr. Sajjad Chaudhry, Professor Ziaullah, Mr. Tariq Qadeer, Mr. Azeez Ahmad Malik, Mr. Khurshid Rashid and several others for their encouragement and persistent support.

All Ravians showed their eagerness and offered to provide full support for such endeavors in future. They were keen to have a bigger reunion for 150 Years Celebrations of Government College, Lahore in a most commendable and noteworthy manner. The mission of the Ravians USA is to build stronger lifelong partnerships between Alumni and their Alma Mater, so as to provide all Ravians for staying connected, develop esprit de corps and to create Ravians alumni engagement opportunities that are substantive, purposeful and meaningful for the Alma Mater and homeland.