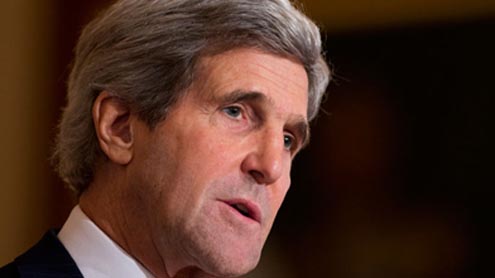 The next president of Afghanistan will sign a security pact with the United States despite the refusal of outgoing leader Hamid Karzai, Secretary of State John Kerry confidently predicted Wednesday. “But for one person and his decision we would be on a different track today,” Kerry told a small group of reporters, referring to Karzai who is holding out on signing a bilateral security agreement to govern the presence of any US troops remaining after 2014. Karzai has refused to endorse the deal, which he hammered out with Kerry last year, saying it should be up to his successor who will be chosen in April presidential elections. “It will be signed by the way,”

Kerry insisted on Wednesday. “Whether it’s signed by him or not we obviously have serious reservations, but all six of the candidates for the presidency of Afghanistan have said that they will sign it.” The Obama administration said its preferred option is to leave behind a residual US force when its combat teams depart Afghanistan after America’s longest war at the end of this year. But it will not do so without legal protections enshrined in the Bilateral Security Agreement (BSA) agreed between the two governments. President Barack Obama on Tuesday warned Karzai that he is now planning for a full US troop withdrawal from Afghanistan, invaded by US forces in 2001 to oust the then Taliban militant leadership.

“Specifically, President Obama has asked the Pentagon to ensure that it has adequate plans in place to accomplish an orderly withdrawal by the end of the year should the United States not keep any troops in Afghanistan after 2014,” a White House statement said. But it added that Obama was reserving the possibility of concluding a BSA with Afghanistan later this year should the new government be willing. Afghanistan votes on April 5, but a run-off and prolonged horse-trading could mean a government is not seated until August.

nato’s chief said on Wednesday he still hoped plans to keep troops in Afghanistan beyond this year could be salvaged despite objections by President Hamid Karzai that have called the mission into question. Nato plans to keep a scaled-down training mission with around 8,000 to 12,000 soldiers in Afghanistan after international troops end combat operations by year-end.

But both the United States and Nato have said that Karzai’s refusal to sign an agreement setting the legal framework for US troops to stay could jeopardise the plan and prompt a complete pullout, dubbed the “zero option”. President Barack Obama has told the Pentagon to prepare for the possibility that no US troops will be left in Afghanistan because of Karzai’s refusal to sign the accord, the White House said on Tuesday. Nato Secretary-General Anders Fogh Rasmussen also warned on Wednesday that if the legal framework is not in place, “then we can’t deploy and then we will have to withdraw everything by the end of this year.”

Nato’s preferred option remains having a training after 2014, he told a news conference during a Nato defence ministers’meeting that will discuss Afghanistan. He said “it may well be” that Karzai won’t sign the securityagreement but he was optimistic that Karzai’s successor, to beelected in an April vote, would. “I hope, I expect, a new president to sign. Because a lot isat stake,” he said.

While the delay has frustrated Nato diplomats because it has eaten into the time available to plan the new “Resolute Support”mission, military officials and Nato diplomats said there was no compelling military need to take a decision any time soon on whether to leave troops in Afghanistan beyond 2014. US Army General Martin Dempsey, chairman of the joint chiefs of staff, was quoted on Wednesday as saying that the United States was nowhere near the point where it could not get all its troops out of Afghanistan by the end of the year. Us and Nato troops levels in Afghanistan have been falling but it would be “well into the summer” before the United States would have to take a decision on whether to allow troop numbers to go below the level needed for the post-2014 training mission,Dempsey was quoted by American Forces Press Service as saying. This would be difficult, he said, “but from the USmilitary perspective, the decision can wait until after the elections.” The Nato-led force in Afghanistan has a current strength of more than 52,000 soldiers, including 33,600 US troops. At Nato too, many officials and diplomats believe there isstill time to plan for the new mission, even if they have to wait for a new Afghan president to sign the US security pact. Their fear however is that the Afghan election could once again be marred by fraud observed in the 2009 presidential vote and that it could be months before a new president is in place,further delaying Nato’s planning. “What the military authorities tell us is that in October we should have about 20,000 soldiers in Isaf (the Nato-led force in Afghanistan) which would permit us to keep options open for the next step,” one Nato diplomat said. He expected the Nato defence ministers to confirm that the existing plan for the new mission was the preferred option “but that doesn’t stop us thinking about other possible options.” Without going as far as the zero option, Nato could also look at scaling back its current plan, which calls for a training mission headquartered in Kabul and four regional bases,and focus instead on the capital, he said.