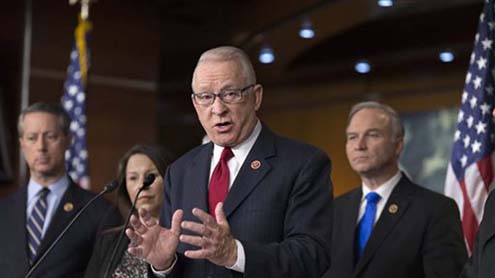 WASHINGTON: A House Republican chairman is seeking from US military officials the names of 72 detainees that Afghan President Hamid Karzai has ordered released from prison.

In a letter dated Jan 10, the Republican had asked that Hagel publicly release the names and any affiliation that any of the subjects might have had with any terrorist group. ”It is critical for the American people to know which dangerous detainees President Karzai intends to release and the threat they pose to the United States,” McKeon wrote in the letter.

Army Lt Col Todd Breasseale, a Defense Department spokesman, said the names cannot be publicly released because they are classified. Giving them to members of Congress is another matter, and the government often shares classified information with lawmakers.

Breasseale did not say whether that would be the case with the detainee names. He would only say: ”We have a long history of working very closely with all of the department’s many oversight committees and will continue to do so.”

Karzai last week ordered the release of 72 prisoners accused of attacking foreign and government forces despite US fears that the inmates could return to the insurgency.

The issue has been a sticking point in Afghan-US relations as the two sides struggle to agree on a framework for the withdrawal of American and allied forces by the end of the year, and the aftermath. Last week, a group of US senators met Karzai in Kabul to warn him that any release of detainees from the Parwan Detention Facility ”would be a major step backwards” for US-Afghan relations.

A review of the prisoners’ cases by Afghan intelligence and judicial officials turned up no evidence of wrongdoing for 45 of the detainees, and there was insufficient evidence on another 27, so they must be released, Karzai said in a statement.

He gave no details on when the release will take place. Sixteen other detainees will remain in custody until their cases can be reviewed further, the statement said. The US wants all 88 to face trial in Afghanistan, saying it has evidence implicating them in the death or wounding of 60 coalition forces and 57 Afghan forces.-Dawn