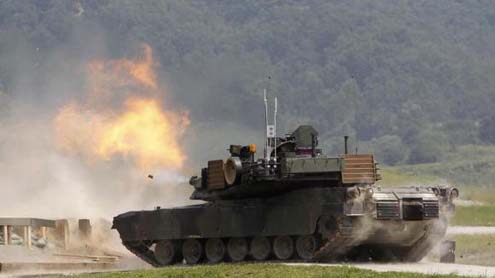 WASHINGTON:  The United States said on Tuesday it will send 800 more soldiers and about 40 Abrams main battle tanks and other armoured vehicles to South Korea next month as part of a military rebalance to East Asia after more than a decade of war in Afghanistan and Iraq.

The battalion of troops and M1A2 tanks and about 40 Bradley fighting vehicles from the 1st U.S. Cavalry Division based at Fort Hood, Texas, will begin a nine-month deployment in South Korea on February 1.

A Pentagon spokesman said the personnel would remain for nine months but on departing would leave their equipment behind to be used by follow-on rotations of U.S. forces.

“This addition of forces to Korea is part of the rebalance to the Pacific. It’s been long planned and is part of our enduring commitment to security on the Korean peninsula,” Army Colonel Steve Warren said.

“The United States and the Republic of Korea stand very firmly united, without an inch of daylight between us, not a sliver of daylight, on the subject of opposition to North Korea’s destabilizing nuclear and ballistic missile programs and proliferation activities,” Kerry said.

The United States has some 28,000 troops based in South Korea, which has remained technically at war with Communist North Korea since the 1950-1953 Korean conflict ended in stalemate.

The deployment of additional U.S. troops comes at a time of raised tensions on the Korean peninsula after North Korea executed the powerful uncle of young leader Kim Jong Un last month, the biggest upheaval in years as the ruling dynasty.

U.S. President Barack Obama announced a strategic rebalancing of U.S. priorities toward the Pacific in late 2011 while ending the direct U.S. military involvement in Iraq and announcing plans to wind down the long U.S. engagement in Afghanistan.

Since the announcement of that so-called “pivot” in foreign, economic and security policy, the Philippines, Australia and other parts of the region have all seen increased numbers of U.S. warships, planes and personnel. – REUTERS